You can view our full code of conduct for Admission here.

The first conference I attended was a global marketing event in the USA. I was a new employee of the company hosting the event. I was lucky enough to get a free pass to all the tracks as it fell in line with my training month.

I don’t know if they had a Code of Conduct for this event. It’s not on the cached version of the website, and I didn’t know that codes like that existed at the time. Conferences were meant to be places where the ~real~ adults went to do business and share professional insights, after all.

Between the buzz of getting a fast track into that world, and the glitz of the production that went with it, I felt like I was infiltrating a new caste of “grown-up” where everyone was as stiffly proper as a board meeting, intelligent as Sherlock Holmes under siege, and frivolous only when there was a shiny new hoverboard salesman parading around the smoking veranda.

Needless to say, I was mislead.

As with larger conferences like this, there were many stages, many speakers, many exhibition stands, and many after-parties. In a booth at one of the latter, I was sitting with some future colleagues and other employees, but soon, let’s call it “The Jagerbomb Impulse” came over them, so I said I’d stay behind to watch their bags.

I didn’t realise that a lot of the other salespeople that were at the bar had brought along business partners and potential customers until I was joined in the booth by an Australian man who started asking me questions about the product.

Immediately afraid that I’d ruined the sale since I’d only had three weeks of formal training I said, “I’m new, sorry.” He didn’t seem to mind. In fact, he kept asking. I wasn’t sure whether he hadn’t understood me (we had different accents and I was speaking feverishly) or if he wanted to give me a chance.

After about three or four minutes of this I was looking over my shoulder every few seconds, wondering how on earth it could take so long to chug that godawful aniseed and Red Bull concoction. The last time I turned back, his hand was gripped around my knee and, as I said “I really should go get back to the guys”, it tightened.

The guy I shared the plane over with came then, tipsily giggling, to tell me it was his round. I felt a weight drop from my thigh and walked over, smiling as hard as I could.

Was he a customer already? Was someone going to lose their commission? Was he going to leave a bad review? Who could he ask to find out who my manager was? I was peeling my mind apart looking for the answer to what I did wrong. To what could make me feel like I had done something so wrong.

There was no one to tell.

You’re the first to hear it, in fact. Almost half a decade has past and, knowing what I know now, I don’t want that, or worse, to happen anywhere near me again.

A good Code of Conduct enables us to interact in a conference or event environment where we can relax and show our personal traits without fear of being harassed or victimised because of the things that make us who we.

Unverified impressions or people’s biases based on appearance, ability or belief are bad, and naïve, both in my experience and in the shared experience of the number of people who’ve opted into having Codes of Conduct.

Any contemporary conference that doesn’t have a Code of Conduct might as well have a picture of a red flag that they link to from their website instead,  typified in the fact that many organisations and individuals refuse to speak at, attend or fund events that omit these codes.

And, if you think that these codes aren’t ever acted upon, this GeekFeminism timeline of incidents should give you an idea as to the number of (reported) issues at events and conferences.

So, that’s why we have one, but here’s how we made ours in a bid to make sure it lived up to standards set by the events that we look up to:

In a previous post on this blog, I linked to a Medium article penned by Karolina Szczur. Her suggestion is that,

“Often, [a] Code of Conduct is a bare minimum for determining whether conference organizers have thought about safety and inclusion at all.”

In the article she goes into depth on virtue signalling and the practice of copying and pasting that many conference Codes of Conduct have been guilty of defaulting to in the recent past.

We tried to avoid that as much as possible by taking inspiration from multiple different sources and tailoring them to our needs. We also spent time thinking about how we would want to be included, and thinking about conferences we’ve previously attended and what we liked/disliked about those experiences.

We like to think our Code of Conduct ended up as a pretty robust outline. However, as we’ll reiterate at the end of this post, we’re always open to further feedback.

We covered the following:

This format allowed us to clarify what is and isn’t permissible, in simple terms, to avoid any misinterpretation or loopholes, and to cater for any situations that may arise that could reasonably be deemed misconduct.

That said there are some items that might require a little elaboration: 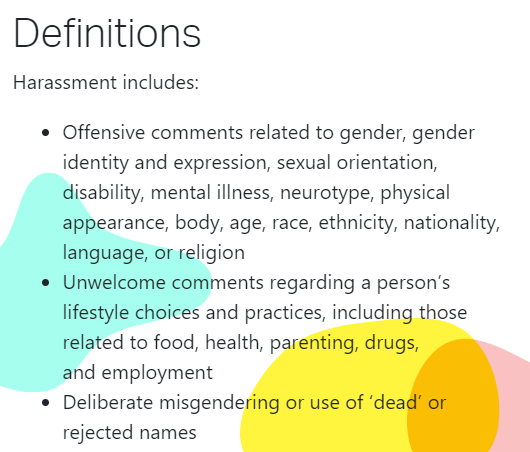 As Karolina mentioned in the article above, the CoC should only be part of a broader inclusion effort at conferences, so we have asked our attendees additional questions post-purchase to cater for dietary requirements, clothing, accessibility requirements, and consent to being photographed.

Thanks to a swift (and deserved) calling out by Florian from RustFest, we have a clear accessibility policy now live on the site which includes: 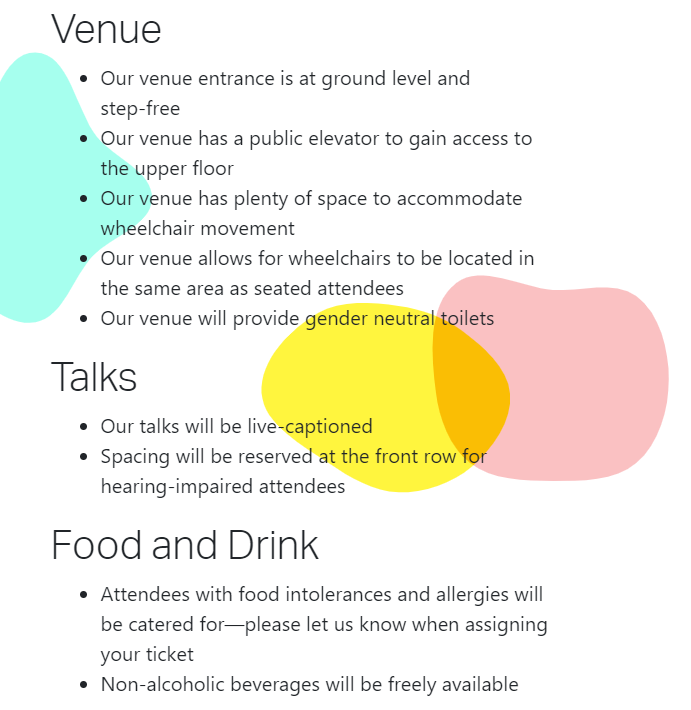 Where we got guidance

Throughout our announcements about Admission, we’ve reiterated that we’ve spent five years with a front row seat to some of the most influential and inspiring conferences on the planet.

A large part of that has been working with emotionally (and otherwise) intelligent, respectful, innovative folks who aim to create inclusive, remarkable experiences. Here are a few that we took guidance from for this year’s Code of Conduct:

Andy, upon opening Brighton Ruby, goes beyond “just be nice to everyone.” He repeatedly says that he wants people to feel able to approach him with complaints, and shares his personal phone number, email, and Twitter handle.

To mirror this, at Admission, any member of our production, volunteer, or security team will be trained touch points attendees can express concerns to, which we will discuss at the time of the conference.

Particularly, Andy’s reinforcement of how to behave if you are the individual who is being called up on an infringement of the code of conduct is important, and there are three key quotes in his outline that explain a reasonable response:

The Django community is a highly diverse one, but they admit it’s “one of [their] huge strengths, but it can also lead to communication issues and unhappiness.” This lead them to create one of the most referenced code of conducts in the tech conference industry.

You’ll see a lot of themes of theirs echoed in ours, particularly their insistence that those involved in their community be “careful about the words their choose.” We used this notion to inform how we defined topics, phraseology, and objects that are acceptable, and those that aren’t.

I appeal to you twice throughout this post to let us know if you see any way we could improve on our Code of Conduct, but that’s meticulously defined as the process of creating a “living document” out of a code like this by the team behind XOXO.

XOXO’s policy is an archetype of how to explain the behaviour what’s acceptable at a conference. We leaned heavily on their examples used to define harassment.

Geek Feminism also provided guidance for us regarding harassment, as well as a way by which we could aptly express our commitment to prioritising marginalised people’s safety over privileged people’s comfort. Further to this, we adopted some language from their consequences section.

JSConf provide one of the first open-source Codes of Conduct that I became acquainted with which can be found here. While this template has been aptly elaborated upon by numerous conference, we also took inspiration from the JSConf AU Code of Conduct, particularly around confidential reporting of incidents and definitions of what a harassment-free experience looks like.

What the results were (so far)

We’ve had the pleasure of securing Kim Crayton as a speaker for Admission. She heads up #causesascene, an organisation focused on the strategic disruption of the tech scene for the benefit of marginalised individuals therein.

This is a conference organizing team who is putting the needs of the disenfranchised and most vulnerable first. Thanks @useTito #causeascene pic.twitter.com/cpGPV6MC2I

It’s heartening to see such a positive response to the efforts we’ve put in so far and we will strive to make our actions speak as loudly as the words that have gone into creating this document.

We were humbled to also get this feed back from Gilles Demarty, the Regional Coordinator of IxDA:

And they check all the boxes for a great event :

It’s my hope that the above information clarifies and reinforces what we want to achieve with our Code of Conduct. An admission (ha!) before we go, though: we don’t think there’s ever going to be a perfect code of conduct, but we strive towards it anyway. Given that this is a conference for organizers, please call us on our omissions, and feel free to let us know what’s worked for you in the past.