Recently I got the chance to sit down with Anthony Allen, president of ACA Video. Anthony has over 15 years of experience in the multimedia world. He and his team are highly specialised: they provide event video services specifically and have worked with the likes of Samsung, Adobe, Capital One and, we’re proud to say, Tito.

He very graciously took me up on an offer to share his experience around what conference organisers need to know about event video, from promotion tactics, to pricing, to what goes into the production of high-quality session recording, live-streams, interviews, and more.

Here’s what he had to say:

“We do about 200 shows a year. Our claim to fame is our quick upload time. We offer either same-day or two-week delivery for anything that we produce. In terms of peak conference season, we’ve done as many as ten simultaneous shows across the world. Each event is a little different.”

How Has the Event Video Landscape Changed in Recent Years?

When I was researching ahead of time for our chat, I learned that 52% of marketing professionals worldwide name video as the type of content with the best ROI.

It therefore came as no surprise that, when asked about the changes he’s seen in the industry in recent years, Anthony highlighted that conference organisers are getting more tactical when it comes to the video assets they use for their events:

“Clients have gotten more savvy. I’ve been doing this for many, many years and the educated client is getting more specific about the ROI, what they’re putting out there, how they’re using it, who’s watching it, and whether or not they’re gonna do it again next year.” 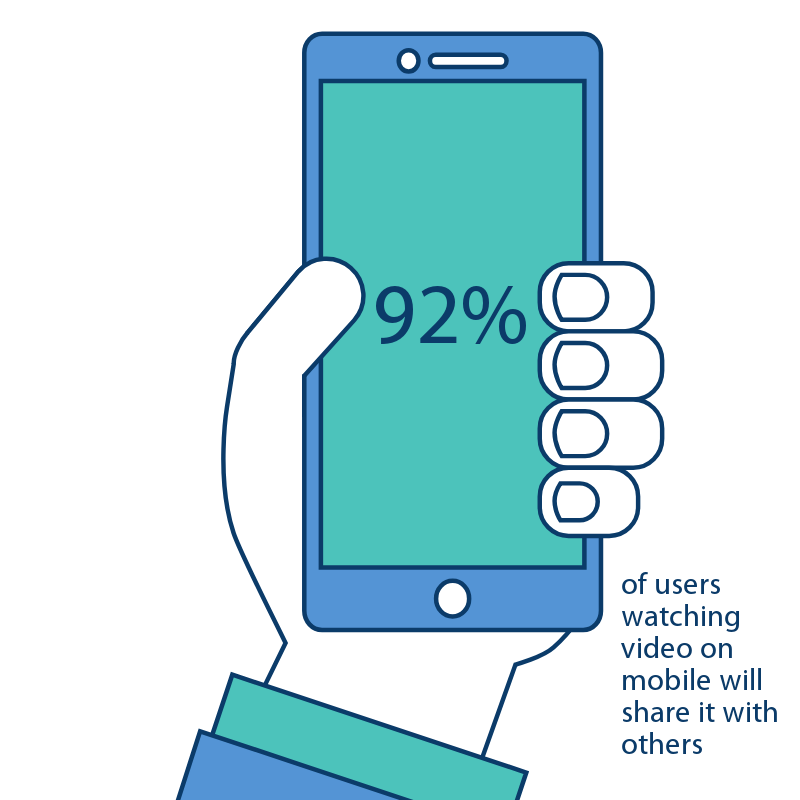 Image Description: A hand holding a phone showing the statistic that 92% of users watching video on mobile will share it with others. Source: Wordstream.

“Let’s say four years ago, the client would say, ‘Let’s record and publish everything! Give all the conference sessions to the attendees and they’re really gonna be amazed at the value of 80 hours of video.'”

“Now the savvy planner is going to say, ‘In addition to the long versions, let’s also do shorter clips. Those things add value to the video.’”

What Are Some Conference Video Tips to Optimise Your Strategy?

While, in general, 85% of consumers want to see more video content from brands, these quick tweaks have reduced stress and increased gains from that video content for his many clients:

“You need to centralise the place where you distribute your video.”

“For session recording, if your data is showing that people are only watching the keynotes, and nobody really watched any of the breakouts, that’s great. You can then say next year we’re just going to record the keynotes and use that unused budget to do a different type of video.”

“YouTube is the second biggest search engine behind Google. Anybody that searches anything on Google, they’re going to YouTube to search for the exact same thing.”

“In terms of the ROI, you’ve already recorded it, you’ve already edited it, do a shorter version, put it up on YouTube for free, like a little snippet, do a bunch of snippets; content which people will find and which will direct them back to your website.”

What Do You Need to Measure When it Comes to Event Video?

64% of businesses who use video believe that it has directly led to increased sales. However, knowing what metrics to keep in mind in order to calculate the full return of your conference’s investment in video is something that a lot of people struggle to figure out when they’re getting started. Anthony shared these insights on the topic:

“Know viewership in terms of number of views, and when people stopped viewing. There are some platforms that will give you more data than others. There’s platforms like Wistia and Brightcove. Brightcove will tell you if the watch time is 100%, or if people watched the first 25% and then dropped off. That tells you that maybe you should chop your video up into different chunks. 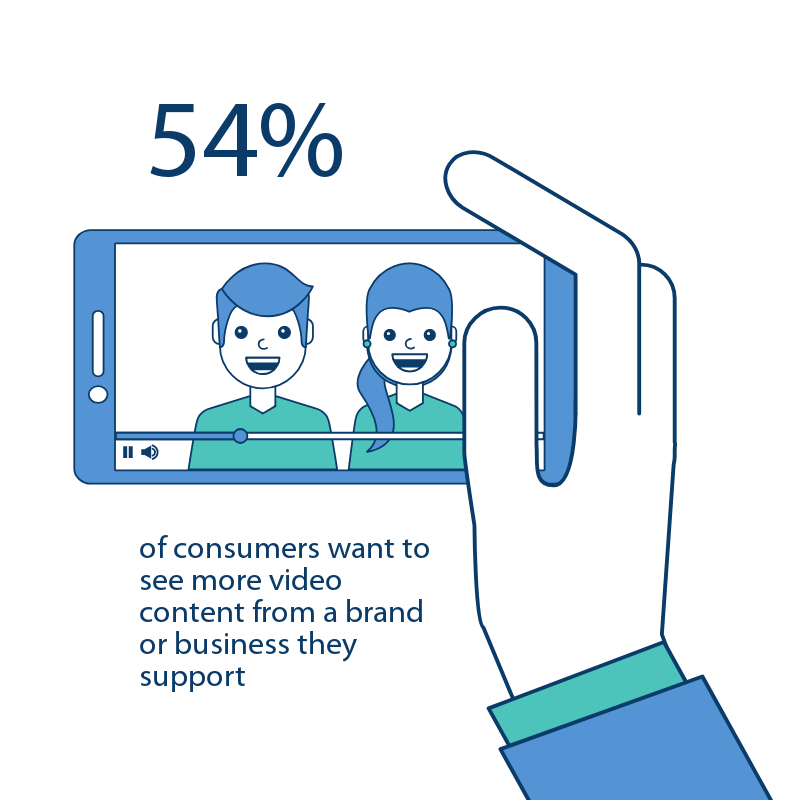 Image Description: A hand holding a phone with a video of two people talking displayed on it. The image features the statistic that 54% of consumers want to see more video content from a brand or business they support. Source: HubSpot.

“In terms of the ROI, measure the ‘sunk’ cost. For example, say it’s only gonna cost us fifty more bucks to edit a video, whereas we already spent $10,000 to record it and edit it in the first place. Just spending $50 per video to get a couple hundred videos up on YouTube that is directing traffic to your site is amazing. But, that’s the last 5% of the job that people often forget about because they’ve moved on to the next show or their ‘real’ jobs if they are only part-time event planners.”

What’s the Difference Between AV and Video Production?

“The first thing to do when figuring out your own event video budget is to remember that there’s AV (also known as General AV or Audio-Visual), and then there’s video. That’s really, really important. AV is microphones, staging, lighting, projectors, rigging, electrical, etc. Those companies earn their money in a different way. They have different insurance requirements. Those companies have heavy lifters, they patch into the electrical. If you’re not doing it right, you could kill somebody; if you’re rigging falls, if you blow a breaker.”

“General AV companies make their money off the event, and they move on to the next event. Video companies continue the editing after the event. They’re really two completely different things.”

“Most ‘all in one’ production companies subcontract other companies: AV companies, video companies, graphic, and PowerPoint graphics specialists. They put together teams so it looks like it’s one company but they’re really just sub-contracting out.

“That’s important because, if you ask somebody to do something that they don’t like doing or don’t usually do, then they’re gonna charge you a lot for that.”

“In this analogy, you’re asking an AV company to record and edit your sessions. They’re gonna charge you a lot. It’s much cheaper to go directly to a specialised video company.

“Now, there’s some exceptions. If you have IMAG [image magnification] on a big screen during a show and you just want the AV company to record that camera, great, go with them. It’s going to be an inexpensive option.

“Events are different. That’s the bottom line. Events, corporate events, are not commercials, they’re not documentaries, they’re not weddings. There are so many people — this is all I talk about all day every day — that do documentaries or commercials, or music videos on the side, or they do weddings, and they’ll come in, they’ll try to do a corporate event and they’ll completely fuck it up.”

“First, you need to run by event times, meaning that you may need to be on site at 5AM. So, you may need to get up at 3AM. Someone who’s getting up at 3AM, they’re not thinking straight, you know? They’re not thinking clearly, unless they’re used to that. If it’s a high-stress situation like, ‘Holy shit! The general session starts in 30 seconds and this thing isn’t working? How do I fix this problem?’ You really need to think quickly. You need to be a specialist and a professional. 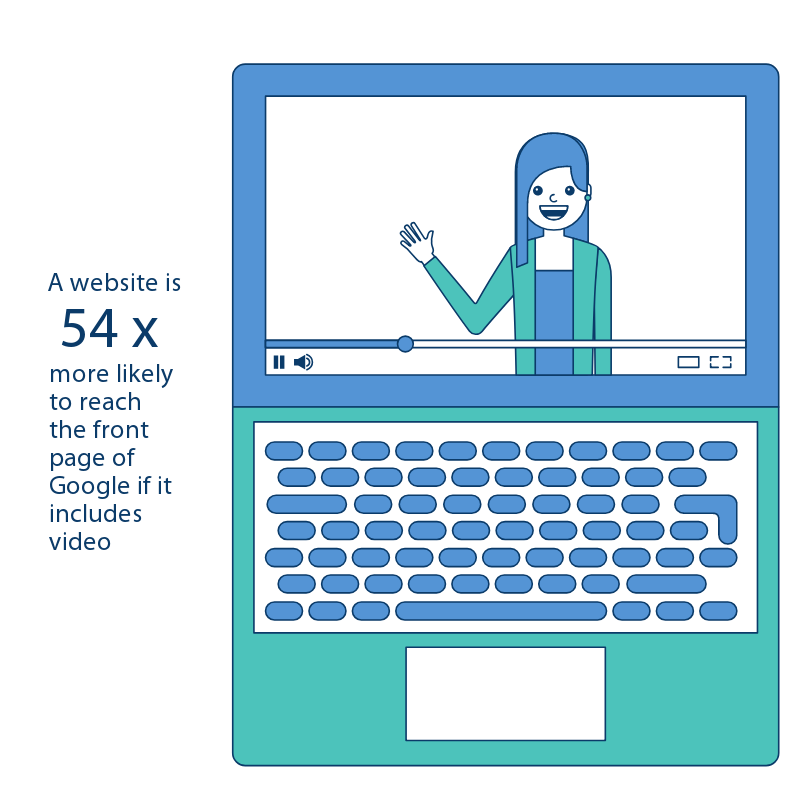 Image Description: A person presenting in a video displayed on a laptop. The statistic beside it tells us that a website is 54 times more likely to reach the front page of Google if it includes video. Source: Insivia.

“I’ve seen it happen so many times. If a client comes in and says, ‘Something went really wrong last year, we need to find someone else,’ nine times out of ten it’s because that company didn’t have any experience with the timing, the pace, and the ‘you only get one take’ approach of corporate events.”

How Much Do Event Video Providers Charge?

According to Lemonlight, for every dollar spent on video, at least $1 or more comes in return from that investment. However, knowing how much you can expect to spend on event video is paramount to your strategy. A resource worth noting at this point, if you’re eager to learn more about the landscape of video this year, it’s worth checking out BreadnBeyond’s infographic on video marketing statistics in 2020.

On the subject of numbers, Anthony was kind enough to give us a ballpark and an equation to help you project your conference video spend as part of our chat with him:

“When it comes to budgeting and how to figure this out if you’re actually thinking about doing it, the standard phrase that I use is:

“1000 dollars per deliverable, per day, plus a block of editing.”

“The $1000 figure includes three things: First, a 10-hour day at $50/hr, second a few hours of overtime (they’ll need to be there 2 hours before show start and 1 hour after show day ends) and third, the equipment (like a camera).

“Now I’ll give you two examples of the equation in use. Say you are hosting a two-day, one-track conference. You want all the sessions recorded. That’s about $2000 to record: $1000 per day for two days. Then it will take about a day to edit all of that footage, so that’s another $1000, for a total of $3000. (By the way, if you assume there are 10 sessions per day, that’s only about $150 per session to record the whole conference.)

“Here’s a second example. Say you want to do a highlight reel, That’s another $3000. ($1000 per day for two days of recording, plus about a day to edit, including multiple rounds of client feedback).

“That’s what you need to record everything. $1000 per day per deliverable per day, plus a block of editing. That gives you a pretty accurate idea of what it takes to record, and edit, and deliver video a corporate conference in the US.”

If you’d like to see some examples of work produced by Anthony and his team, you can check out the ACA Video website. You can also see what they produced for our conference, Admission, in this YouTube playlist.