Space is the most lucrative commodity in Dublin.

For those of you who are not familiar with property in Ireland’s capital, here are some statistics:

But, as the situation worsens, there’s yet another culprit set to ruin people’s lives, and cause scenes of hair-pulling in council offices: allegedly, it’s street art.

SUBSET are a collective of artists who’ve come to notoriety for large-scale murals and political art pieces throughout the city.

Whatever your opinions on the sanctity of planning permission legislation (more on that later), the collective are due to host an exhibition called Grey Area at the end of this month. The event will be the latest in a series of homeless fundraisers by SUBSET who will be donating all proceeds to Inner City Helping Homeless – a fully volunteer-staffed charity that works with displaced individuals in Dublin.

I caught up with the individuals behind the project to talk about art, its absence, and the human condition.

When asked why the artists started SUBSET, they simply responded “to switch stuff up.”

SUBSET first came to national prominence when they erected a mural to welcome Stormzy to Dublin in March of 2017, then welcomed by local businesses in the area:

However, though not due to content, a controversy came to surround the mural when Dublin City Council demanded its removal, despite SUBSET having gotten permission from the owner of the building it adorned. 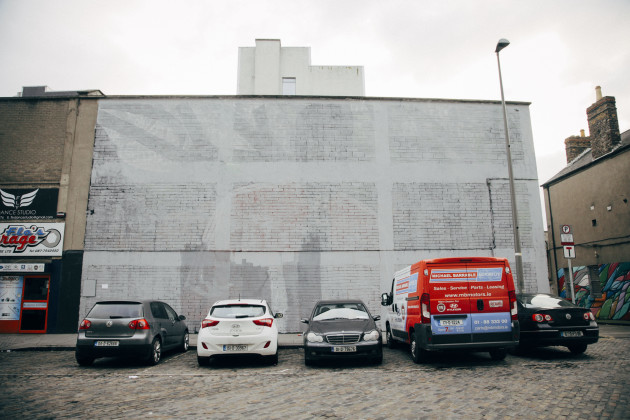 However, in a turn fitting the character of SUBSET that the people of Dublin have come to know, a plaque was placed in commemoration of the aesthetic change, featuring the line: “The drab, lifeless scene drains the colour from its surroundings, giving a stark warning about the threat of bureaucracy to imagination.” 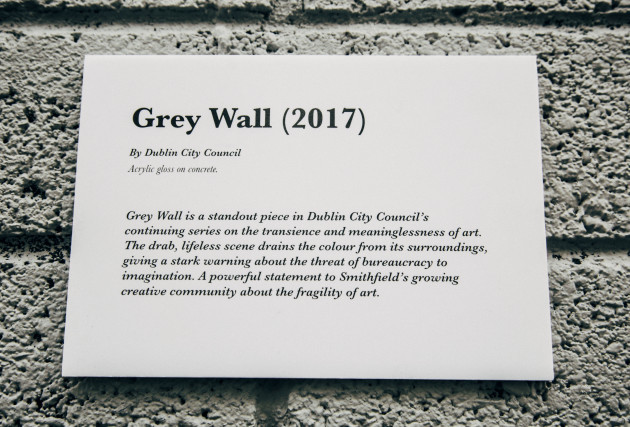 Gracefully, SUBSET haven’t let removals like this dampen their attempts to add a sense of conscience and vibrancy to the city and have continued to create yet more impactful pieces since:

9,562 and counting without a home. Donate at @ichhdublin or buy a print. All proceeds going to assist with the issue. #greyareaproject #52

If you’re so inclined, SUBSET are running a petition calling for the licensing of public spaces for the delivery of large scale public artworks which you can sign here. At time of writing, they have received 9,321 out of their target of 10,000 signatures.

Grey Area is, as we’ve mentioned, a direct response to the homelessness crisis affecting Ireland. The exhibition will take place on October 26th in Point Village.

You can find tickets for the exhibition here.

To date, the collective have raised around €4,000 off the back of the homeless fundraiser and associated merchandise; around the same amount as cost of securing planning permission for the Stormzy mural, which stood at €4,563.36 at the time of its creation. 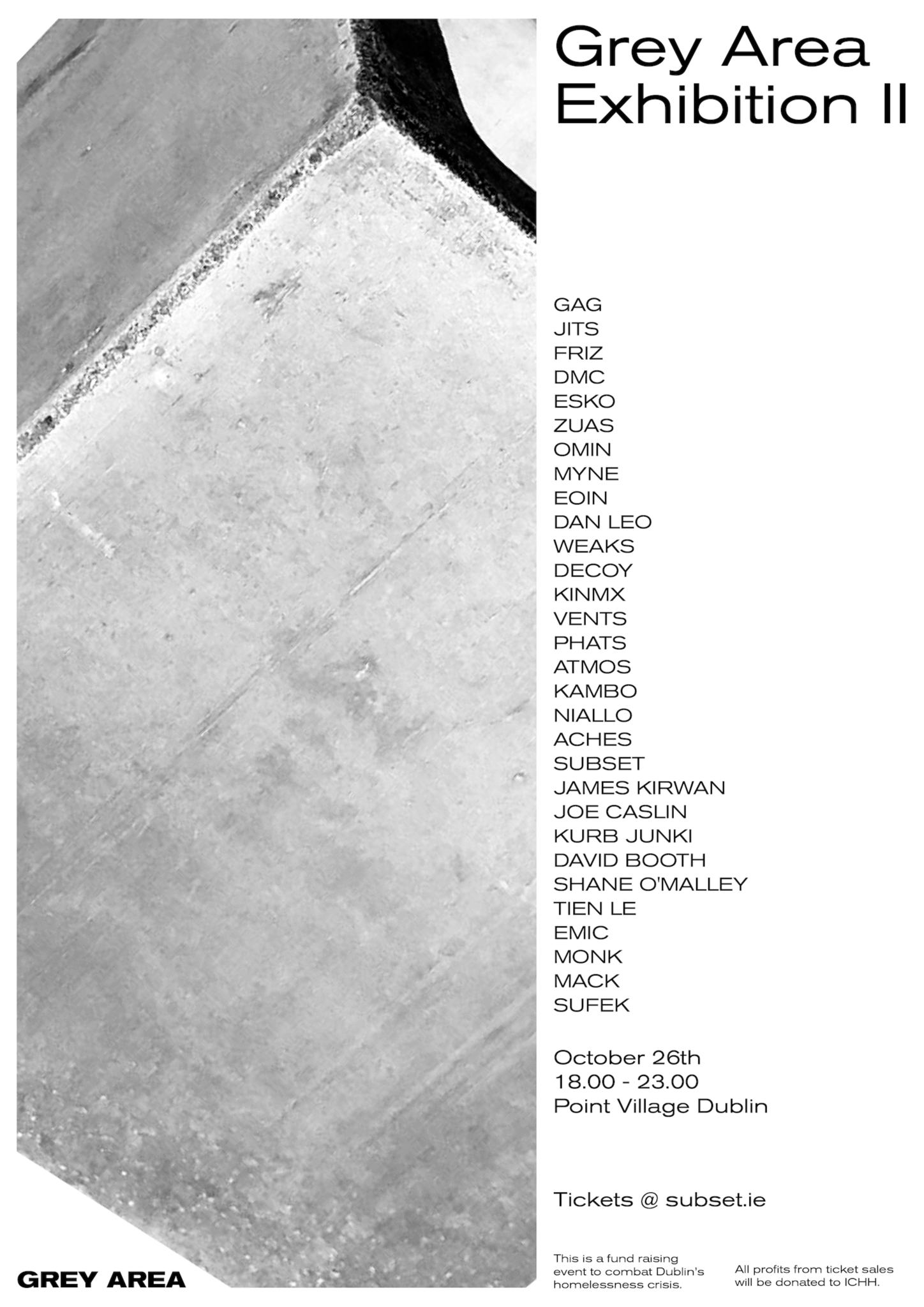 I asked the collective what that €4,000 meant to the charity they were helping with Grey Area, and how much headway they were making towards their target of between €30,000 and €50,000:

“Poorly, not unsurprisingly. €4,000.00 is peanuts, we should be doing better. Not going to stop us though. This isn’t a hobby, we’re geared up for the long run.”

In another succinct response, they described the local government’s decision to remove the public artwork as “ignorance.”

As a follow up, I asked why they thought so many people are homeless at this point in time and, given the connection they’d already drawn between the authority’s protectorate decisions, I wasn’t surprised when they replied:

Homelessness is, without doubt, an admirable issue to aim to help with, but I wanted to know more about the connection SUBSET have with the issue. I asked why SUBSET chose homelessness as the problem they want to help with through this initiative:

“The situations are incomparable in real terms. The struggle of the artistic community, although a prominent issue, is a drop in the ocean when compared with the plight of those who have found themselves homeless.

Our understanding of homelessness, and the housing crisis in general, is relatively limited. But we are doing what we can with the resources we have at our disposal in an attempt to assist those who are well versed in the matter, namely ICHH.”

The collective have released an eight-minute documentary about the origins of the exhibition, which is available here:

The exhibition is the result of a collaboration of multiple artists, creating works across several mediums. Each guest will receive a copy of the 64-page single edition Grey Area magazine.

Tickets must be purchased 24 hours ahead of the event as none will be available on the door. Those tickets are available here. 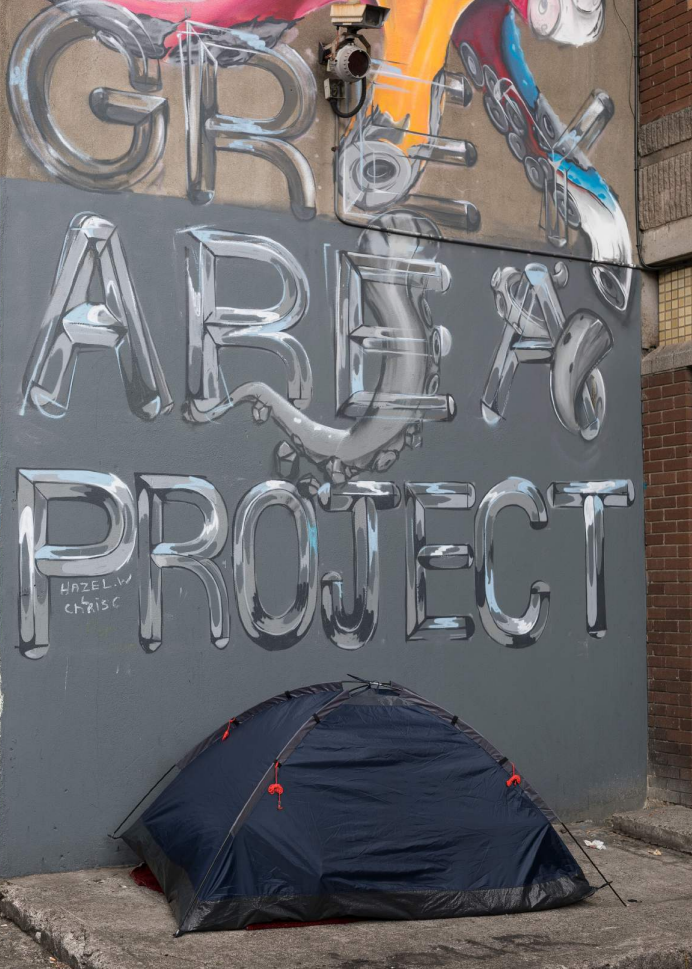 I asked, finally, how the art that will be showcased relates to the charitable aims that Grey Area is based on:

“The primary purpose for producing the art pieces is to raise money for the issue. The project started as a protest in relation to the regulation of large format artwork but it has since changed course to assist with a far more pressing issue.

We’ll return to the original when the time is right.”

If you aren’t in Dublin but still want to contribute to the cause, you can refer to the SUBSET site store. Many items’ proceeds will be donated directly to ICHH.