Conferences targeted at creative professionals is a very competitive space. Only a few conferences survive past three years. Survival nowadays is down to the quality and innovation of the production. There was a time when there was only a handful of creative conferences but now they are as common as gluten free cookies.

Debt forced him into creating a conference

John started creating conferences in 2006, the current name of the conference is Reasons to. That’s over a decade of longevity; something that is a rarity. John Davey, the founder, started the conference because he had no other options:

“Years and years ago I was a flash developer. Adobe, it was Macro Media back then, had a product called Generator. I wrote a couple of books about it and was on the speaker circuit and flying around the world.” 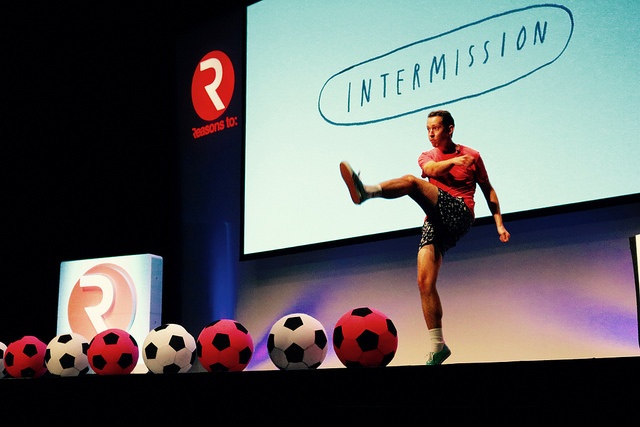 Professionally the proverbial hit the fan because Macromedia Generator was discontinued in 2002. “My daughter was born three months premature when we were on holiday in Austria, that was during the time that Generator was canned. I took my eye off the ball. By the time I got back to work no one really wanted the Generator guy. I went from the guy that everyone wanted and to the same as everyone else.”

“I got myself hugely in debt. I thought, how do I get out of this? I know! Why don’t I run a conference like the ones that I’ve been speaking at. I decided to create an event. About six weeks into the ticket sales I thought, shit, if this tips out I’m going to have to sell my house and my wife is going to kill me.”

Thankfully his wife didn’t kill him. The event became the biggest Flash conference in the world. He ran it for five years, it became so popular that he started to run a similar event in New York. It was around this time that he wanted to inject more creativity into the event, and so he looked to innovative ways to run a conference.

“I’d meet someone at a party and they would ask what do I do and I would tell them that I run a conference called Flash on the Beach. They would tell me that they heard about it but would never go to it because they are a designer. I would list out the names of the world’s leading designers that we would have at the conference.” They were shocked and confessed that they never went past the title. 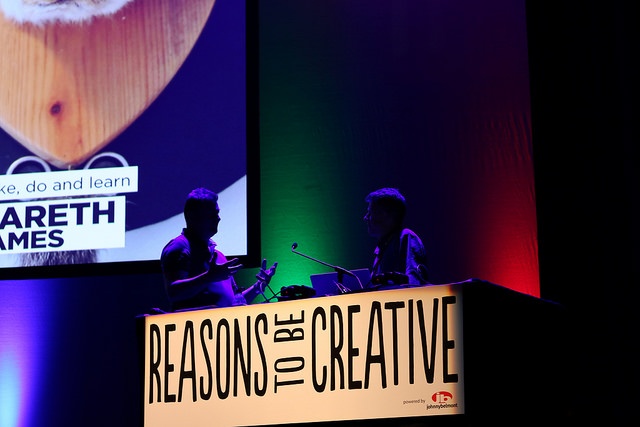 John knew that he had to get away from it quicker than you can say “it’s a trap“. He changed it to Reasons to Be Creative. That created another problem for him:

“Suddenly all of the techies didn’t want to come because of the word creative in the title.” That led him to slim it down to Reasons To, his theory is that if your title is somewhat vague people will be less judgemental. They will read more about the event and, in turn, buy your ticket.

The decision to use the word festival as a descriptor

He took inspiration from Offf Barcelona, a 5000+, annual, three-day event. They have beer tents and areas to relax in the sunshine. Just like a festival, people can check out talks that interest them or have a few drinks and relax.

“People have said to me that the way that I run the event is not really like a conference. A conference sounds a bit more like a corporate thing where you sit and you learn in a classroom environment. Although the event is in three theaters, the way that I run it is in between each session the music is seriously pumping. It’s not background elevator music. I want to create a vibe. I run it like you’re going to a show. The second the speaker comes on the lights are dead. They’re completely out, there’s no sound and then they focus. It’s a mental thing really. You’re getting them to focus without them realising that’s what you’re doing. You’re engineering it.” 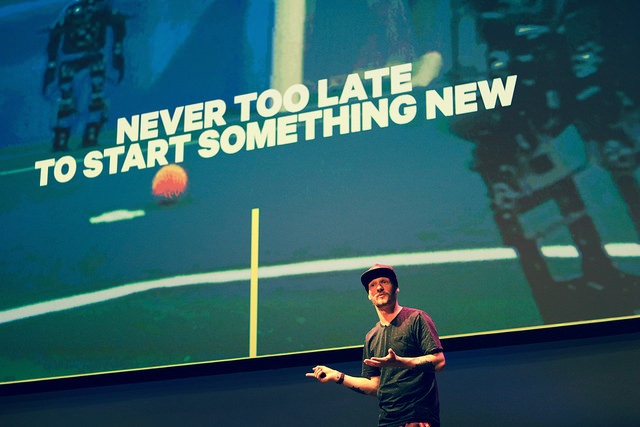 He saw a marketing opportunity in using festival as a descriptor. It’s described as an, “international conference with a festival vibe.” This approach means that it appeals to people that liken conferences to stuffy events but the retention of the word conference also appeals to some bosses that pay for the tickets of their employees, “at least bosses can’t argue that they’re not going to learn something.”

“The day sessions finish around five, and the evening session starts at eight.” The attendees are encouraged to leave their laptop and notepads in the hotel, “this is a talk for the attendee to kick back and get inspired by.” To incentivise them he gets a sponsor to cover the drink at the bar in the venue. All the drinks are a pound, the bar opens after the evening talk. It’s a strategy that re-energizes the audience.

It goes without saying that, aside from the narrative, the content and the delivery of the talk needs to be of the best standard:

“I’ve been to events that had speakers that have the most amazing work. They’re the type of people that must be at work all the time because they’re so talented. But they are the most dull speakers I have ever seen! Of course I don’t want that for my event. I want someone that has stagecraft and a bit of a presence and charisma. I want something that can hold the attention of someone for the forty five minutes or an hour that they’re on stage. I will often turn down people that have got amazing work if I know they can’t hold stage. But likewise I’ve got to say I have been to events before where I’ve seen people that have amazing charisma yet zero content. It upsets me that those kind of subtleties are not recognised unless you say it.” 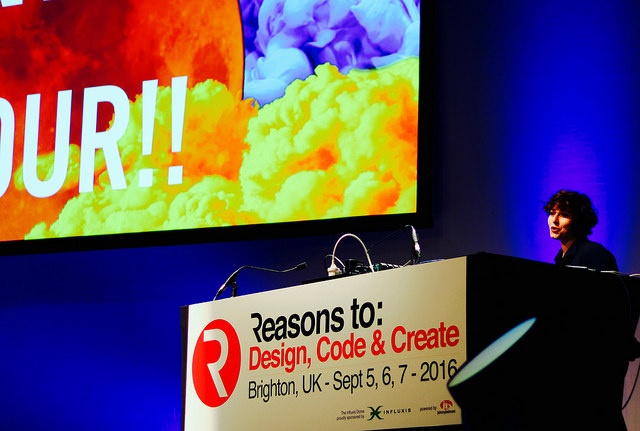 Interestingly, in a recent survey of our customers 11% said that their greatest challenge when creating an event is creating new content. In order for an event to have longevity it needs to be obsessive about detail and put the attendee experience to the forefront. Research your speakers, if they put themselves out to every event going then how can you justify your ticket fee to your attendee?

As John says, “what you want is niche, middleweight and heavyweight speakers. The heavyweights are the draw. The middleweights are the people that are the energy that the attendees need to feed them with new ideas, new inspiration, stuff like that. And the niche people are the ones that the techy kind of attendee wants to go and get their fix of. I need this mix. When I get proposals if I look through a list and see that they’ve spoken at half a dozen events here and there I think they’re not for me because you’re just everywhere.”

His other solution was the introduction of the elevator pitch.  “20 newbies get three minutes each. I’ve set it up in such a way that there’s less than a five second break in between each speaker. The audience are given feedback forms and they get to vote for their favorites. The three top elevator pitches get invited back as full speakers the following year.” That’s three less speakers that he has to worry about securing the next year. 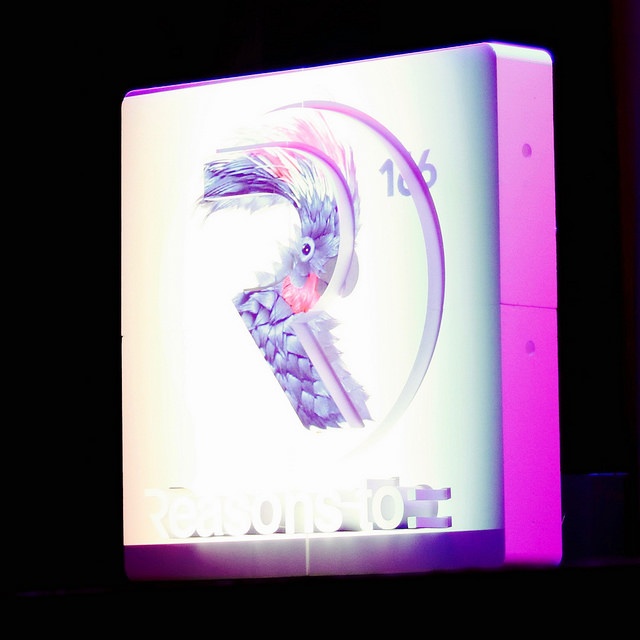 “Over the years I’ve probably had 25 or 28 speakers that have come from that format. It’s an ego massage for me when I see them invited to other international events and it all started because I gave them the chance with their three minutes.”