It’s annoying when people use superlatives to make what they write sound better. In fact, it’s the worst.

I don’t want to talk about today’s Most Successful Women for this. To me, it’s borderline impossible to come up with a comprehensive metric for what constitutes success; it’s just too subjective.

I For One Welcome Our Corporate Overlords

I could have broken down the rise to fame of Sheryl Sandberg, Susan Wojcicki and Safra Catz, but the internet has already done that for me many times over.

Only 6.4% of Fortune 500 CEOs are women, and that’s on my mind, but the natural instinct to jump to the leaders whose professional careers revolve around CEO, IBM, HP, and other capital letters is overdone. I wanted something more relatable.

Spoilers: these aren’t their legit resumés, but they catalogue their important life-lessons such as:

How to go from Home Depot to a Director at Patreon 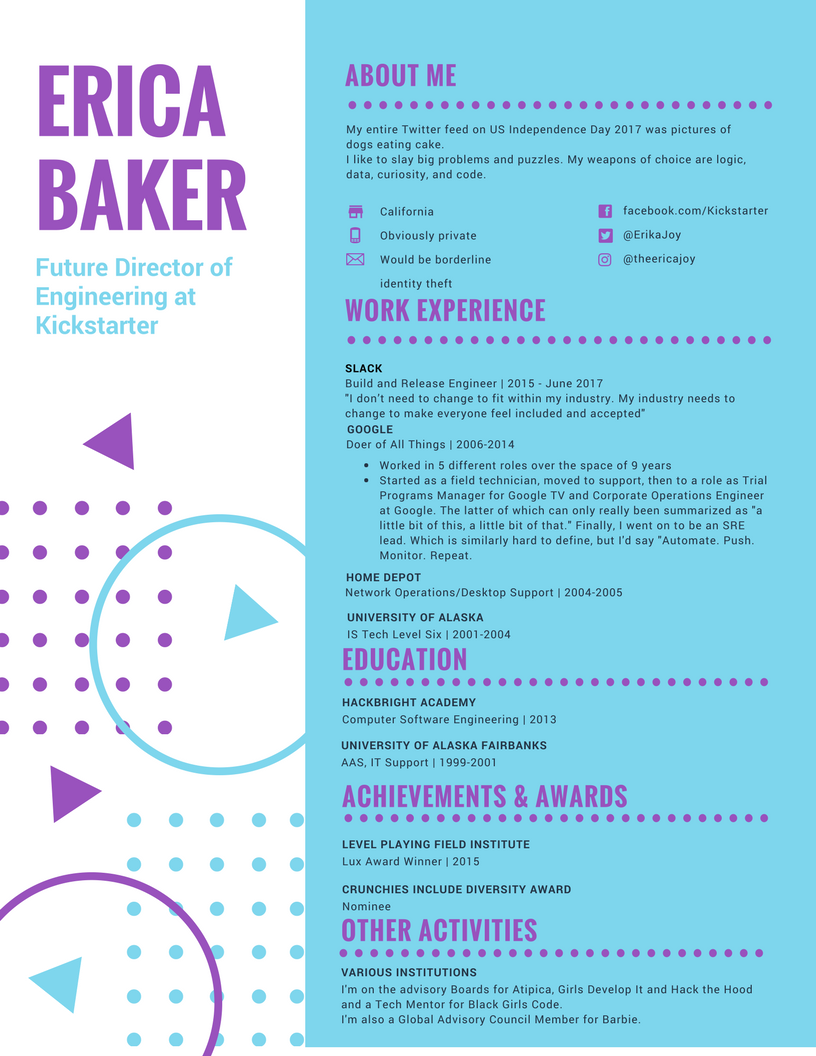 In a recent interview, Baker gave high praise to her then-employer, Slack:

“When I got hired at Slack, the CEO told me that he wanted me to be comfortable saying what I want to say. A lot of people don’t get that. At a lot of companies you will not say a word, or you will lose your job.”

So, what’s the lesson?

1) A person’s ability to persevere through adversity is one way to view success.

Erica speaks bluntly about the early years of her tech career when she was the only black person on her floor in the University of Alaska. She chronicles “formative” experiences when she was assumed to be in an abusive relationship, a single mother, and a child abuse sufferer.

Factually, she was nothing of the sort. Racial and gender stereotyping lead to these assumptions.

Erica went through a lot, and accomplished even more.

2) Success can be defined by the choices a person makes when they get a position of power.

Not being taken seriously or being forced into a culture of toxic masculinity can ruin a person’s professional life, but it can also harm their personal well-being.

It was not long before Erica developed heart problems which she now associates with prolonged stress induced by her earlier jobs.

Despite this, she used these circumstances as a catalyst. She’s become proactively involved in making other people’s chances better. She is now, for example, a Tech Mentor with Girls Who Code.

3) Take care of yourself.

Some people are strong enough to acknowledge that they don’t deserve to be taken advantage of by circumstances that are beyond their control. Erica, our case in point, made an admirable decision and took to therapy.

Erica’s Medium has more honesty than most people’s dark-hour phone calls with their mothers. There, she frames her personal struggles with depression with the a warrior’s resilience.

She was allegedly awarded an opportunity to work with Slack off the back of a Tweet (which you can see in the About Me section of the above resumé), but not before she figured out the intrinsic power she has always had within herself. 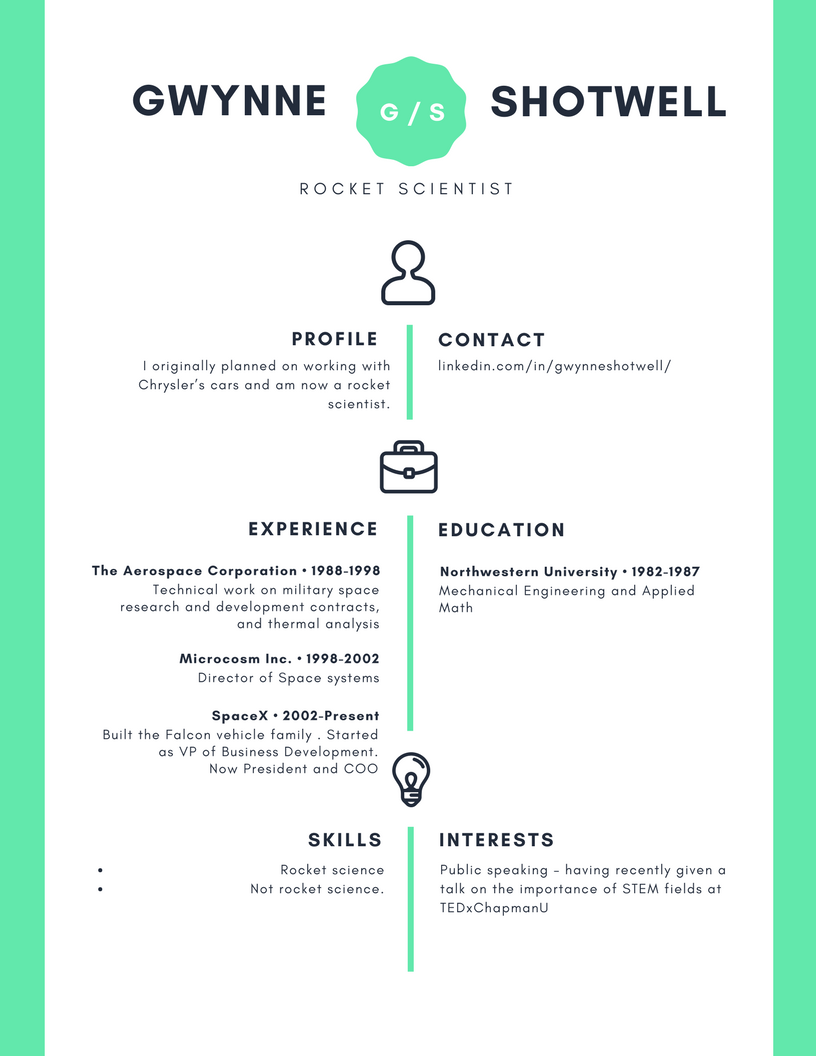 Professional development can happen outside of the four walls of an office. It can happen on a commute, at a seminar, or on the tarmac when you’re about to travel to Houston to broker a deal to send things into space.

One of those is less common than the others.

But what happens when someone gets to the top? Or when they feel like they’re progressing, but have a setback?

1) “It feels like a punch in the gut when you see the rocket fall to pieces.“

Rockets don’t work sometimes. They don’t launch. Or, when they do launch, something makes them blow up.

The burden of these failures falls on Gwynne, but her response is usually more remarkable than the explosions.

When Falcon 9 repeatedly failed, she simply went into a process. She picked up the phone, called her customers, explained her story, and kept it together.

I’ve always found that professionalism is the ability to keep collected when it’s our responsibility to solve a problem for the people who rely on us. Gwynne recommends that we not look super stressed and disappointed to our client base.

Bottling emotions for too long can be toxic, but clients and customers provide a vacuum where those emotions sometimes have to get filtered out until a solution is provided.

The over-arching theme of Gwynne’s advice for those getting started in their careers straight out of school is to take jobs or positions that they would have never seen themselves doing.

She says that we should take risks, and figure out what we’re there to do as we go.

2) Networking connections don’t have to be superficial.

A crisis of faith when it comes to career goals is something a lot of people inevitably face. Above, you’ll see that our favourite rocket scientist, initially went down the road (oh no, a pun) of working on cars at Chrysler. While this didn’t lead to a full-blown crisis as such, Gwynne did take some time to question whether she was making the right decisions.

But, at a panel discussion hosted by the Society of Women Engineers in 1979, she got inspired.

In an interview with Satellite Today, Gwynne retells the story of her turning point. After one of the speaker’s presentations, she was compelled to approach them.

Throughout the talk, there were two things on Gwynne’s mind: how fascinating she found renewable energy and construction, and how fabulous the speaker’s suit was.

She opened the conversation afterwards with questions about the suit’s tailoring, and closed it with a renewed passion for mechanical engineering.

Too often we frame these kinds of aesthetic connections and introductions as being vapid; what substance does a woman have if her first instinct is to judge someone by what they look like?

It turns out, plenty.

If we feel a connection to someone on a level that we feel comfortable using as a way to build a relationship with them, it doesn’t matter what form that connection takes.

To my mind, what forms substance is how hard people work on the passions that connect them intellectually or professionally, and the drive they have to use the connection to further that passion. Even if the passion is buying pants suits.

While encouraging steps have been made towards women finding their place in the upper echelons of corporate management, further work needs to be done on sustaining the flow of qualified women into the next generation of those seats.

As it stands, only 15% of staff in high-tech companies are female. Key contributors to the increase of that number are going to be both financial and educational. In Gwynne’s Interests section above, you’ll see that she actively pays it forward by organizing the Frank J. Redd student competition.

This initiative has awarded over $350,000 in scholarships for small satellite concepts. The mobility provided by prizes like this can play a big part in giving women opportunities to further their stakehold in the engineering world. 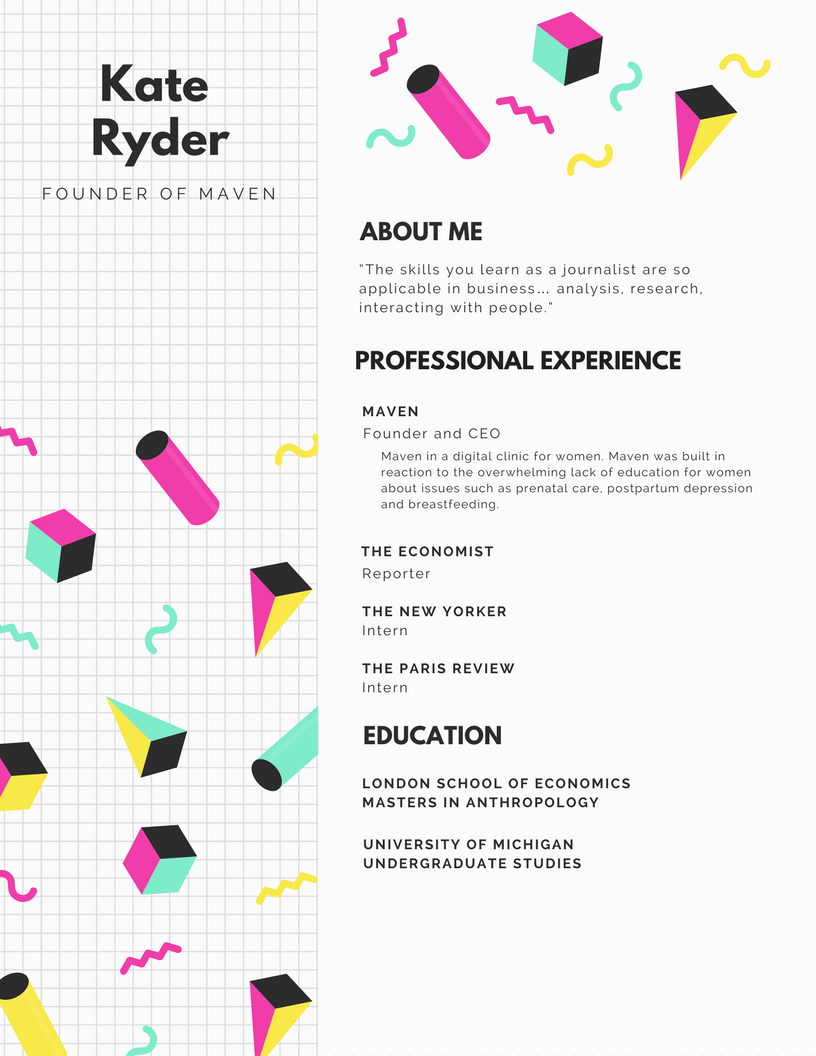 1) A career change doesn’t mean you were bad at your last job.

In Kate’s About Me, you’ll see that her connections to the business world always ran deep.

The analytical and persuasive tactics she picked up during her time as a journalist propelled her to success when she started her own business. They helped her with negotiations and hiring, for example.

When someone genuinely believes in the acumen they have for a new area, a lack of direct experience shouldn’t be what holds them back, if Kate’s career is anything to go by. Kate holds a degree in Anthropology from LSE and founded Maven – an app for consultations about women’s health.

This suggests that, if a person thinks they’ve done everything within their ability to succeed, but they don’t feel inspired, and have more of a chance of enjoying work in a related field, then just maybe they should go for it.

Once there’s a viable way for someone to work their way into the area that they can contribute to in a positive, fulfilling way, the only thing stopping them is their attitude.

Kate wasn’t making enough money in journalism. As a result, she upped roots and headed east.

Her first initiative after leaving it involved founding a Chinese travel agency in Singapore. Which failed quite badly. (Sorry Kate) Perhaps not the most inspiring women in tech story ever told.

Although, perhaps it is.

Instead of wallowing, she transferred the lessons learned from the experience into researching venture capital and how financial stability in entrepreneurship ticks, which also came in handy when Maven was born.

3) It depends on who you know.

Kate told a journalist at Covateur that,

“Maven, at its core, is about building networks of people and then building technology products to connect them.”

Whatever the specifics, the stories of these inspiring women in tech have a common denominator: women have created great things.

Given that Kate’s best friend is a doula, she work with her as a resource to understand what the most common issues are with women expecting children.

As well as this, she held focus groups and interviews leading to her building Maven. During these, she got full exposure to an outcry about the lack information available regarding women’s health.

You may not know the First Lady or the first female prime minister (tbf, she’s dead), but people tend to associate themselves with people who know at least one interesting thing.

This suggests that seeking out the experiences of others can help us on our own journeys, as we certainly hope these stories will.

The inclusion of inspirational women in tech consistently betters the innovations we see arising from the field, whether it’s code, rocket ships, or apps.

We’ll be continuing our series on diversity with a view to showcasing yet more inspirational people and the rich differences in how they’ve accomplished their goals, and the impact those accomplishments have on all of us.

For some practical ways to find people of interest such as these for your next event, check this out: