Have you ever exercised in virtual reality?

I have, but more in a watching-a-full-body-dumbbell-set-on-YouTube-while-eating-biscuits kind of way.

Today I’m here to tell you about a business that’s built itself on providing an immersive way to gamify your workouts.

A large part of this acceleration in popularity (and a seven-figure investment) can be attributed in part to the company’s strategic attendance at startup trade shows, as attested by Scholl during an interview I was lucky enough to catch at a conference in Munich earlier this year.

Afterwards, he obliged me by answering a few questions I had about what startup trade shows cost and cover. Whether you’re an aspiring inventor, or an event organiser, you could do worse than hearing the ICAROS story.

If you’re a startup considering your first trade show exhibit, here are some things their experience suggests you should think about:

According to Exhibits USA, the average cost of exhibiting at a trade show can be estimated this way:

You can estimate your total event budget by multiplying the cost of your space by three. For example, the average floor space costs $21 per square foot. So, for a 20×20 floor space rental expect to pay around $8,400. The budget for that event would be $25,200.

Which, to put it mildly, seems a bit pricey. However, Scholl was kind enough to share some of his cost-cutting measures that don’t affect the quality of the attendee experience:

Think about what you really need and what you do not need. Trade show organisers know how to make money. Some will try to charge you $5,000 for an internet connection.

To save money and cut corners, he recommends the following:

Set it up yourself, use advertising, don’t use an agency. Don’t have five blonde girls handing out sweets.

He also says that planning what you’re attending well in advance is another way to save precious startup $$$s. And, the good news is:

80% of the trade shows [ICAROS] went to have been worth it.

Interestingly, I did a quick Google search (with proof below) to see how interested the general public have been in trade shows in the recent past, and was surprised to learn that said interest is in steady decline:

However, as those in the know will tell you, data is cool, but check it twice. On top of the financial proof that we can see from ICAROS’s example, interest in events in the startup niche are, conversely, on the up-and-up (except for that spike in 2004, which this author is currently investigating), based on similar analysis:

The Most Common Mistakes Startups Make at Trade Shows

Besides failing to perform a cost/benefit analysis before heading out to exhibit, there are a few key considerations that startups can find themselves guilty of forgetting in the build up to a trade show, if they’re not careful.

When I asked him what factors, besides the cost of exhibiting are the most important when presenting at a trade show, Scholl shared this:

Think about the attendees. Who is visiting the show and what are your expectations when it comes to sales, awareness, and media coverage?

Also think about how the event is scheduled. Shows with a duration of more than three days can be a stretch, especially for small teams.

When interviewed at the aforementioned conference I attended, he shared a few other nuggets, specifically in the form of his personal “f*ck up stories”:

One of the most common mishaps is when your stuff doesn’t arrive. You’re at a show in Japan or the USA and think, ‘Where’s the box?’

Of course, preparation and follow-up are nine-tenths of the law when you’re trying to avoid sweat-inducing circumstances like that. Scholl recommends you,

Always bring Gaffer tape with you. Always have some tools. The evening after the event, debrief with your team. Tell them, ‘This went great!’ or ‘This could be a potential answer to that question we were asked earlier.’ The key is gaining experience and working on tailoring the message for your audience.

That said, since startups are paying to appear at these events, there’s a degree of responsibility that lies with the organisers rather than the exhibitors. When asked what information Scholl wished trade show organisers would give exhibitors prior to events, he said:

The booth location is a good example. [You want to know if] you’ve been placed in the ‘right’ hall. Who are your neighbours? This can be a very important factor. It’s about not only being informed, but being involved.

As well as knowing your neighbours, knowing what disappointments could lie ahead of you and mitigating them (in as far as some of those needs are within your control) is worth its weight in gold.

Based on research published by SpinGo, these are the top five reasons trade show exhibitors felt disappointed while attending major tradeshows in 2017: 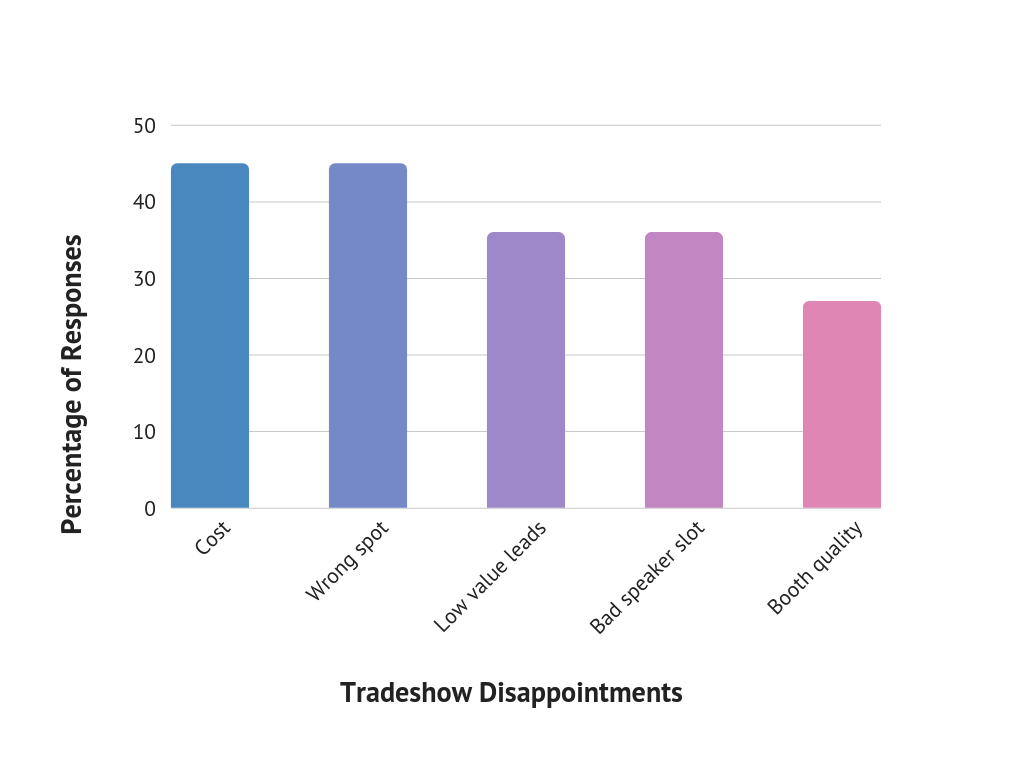 The Biggest Benefits of Going to Trade Shows

There’s a certain potential that comes with live experiences versus other types of communication (honestly, Tito wouldn’t be in the business we’re in otherwise) but it’s not often you get a breakdown as to the specific benefits you get. Scholl, in character, was more than happy to share:

At super focused [trade shows] you can meet everyone in the industry at once. You don’t have to do every show every year.

Obviously, we look for customers at trade shows, first and foremost. It’s almost as important as meeting the media. We’ve met a Forbes magazine journalist in Las Vegas. We’ve met investors. Whenever there’s a trade show that grants awards, we always go for it.

However, there are some [trade shows] that are very non-transparent; they’re ones I’d warn you against. Another negative for some shows is that some are five days in a row until 8pm [every night]. You need to see if you have capacity for those shows.

The Best Trade Shows to Go To

I write this paragraph with a pinch of salt, because there are so many variables when it comes to audience, location and simple preference, but these are (after much trial and error) the top three trade shows startups should attend, according to Scholl:

There are so many good ones, but these are special:
1. CES in Las Vegas — Super buzzing atmosphere, the most innovative technologies, and a unique setting. Great media coverage.
2. ISPO Munich — Sports enthusiasts all over, booth parties in the evenings.
3. FIBO Cologne and EAS/IAAPA — Two shows that are super focused (fitness/entertainment) and therefore very effective for doing business.

Trade Show News Network gives us a bit of a broader breadth of what’s available and popular in the industry, in case virtual reality sports aren’t your company’s thing.

Top of the list (in the US) are the following:

A special thanks to Johannes from ICAROS for his insights, and to you for your reading time.