In the seventies and eighties, commercials for Alpo dog food featured broadcaster Lorne Greene extolling the virtues of the product by feeding it to his own beloved pet.

While I’m disappointed he didn’t prove its deliciousness by chowing down on a spoonful of the stuff himself, the ads did inspire the phrase “dogfooding”—where an organisation uses its own product as a means of testing it in the real world.

What better way to understand your customers’ experience than by being your own customer?

We use Tito to sell tickets to all our events. This year we’ve run three editions of Úr, an informal get-together for event organisers, in Dublin, London and Berlin. Our co-founder Paul is using Tito right now for his event, Úll (a conference with a super cool concept).

And of course we’re proudly using Tito to sell tickets to Admission—our first ever conference, coming to Chicago next month. It’s a day of storytelling, facilitated by seasoned organisers in the events industry, and we can’t wait!

But back to Tito.

In this post I want to talk you through a few ways we’re using Tito for Admission, in a bid to provide a little inspiration and perhaps even some tips for your own events.

I recently blogged about how customers are getting creative with our embeddable widget in the wild. We put a lot of effort into the design of the Admission brand and conference website, so we wanted the ticket buying experience to feel seamless.

This low-fidelity GIF doesn’t really do it justice—check out the widget in action here.

We embedded the widget and styled it up to be semi-transparent, so as to allow the subtly animated shapes to be visible behind it. It coordinates with our three-colour palette, and looks like a native part of the website.

Since the widget picks up whatever settings you select under Customize > Homepage in Tito, we’ve elected to show our ended Early Bird Ticket and upcoming Late Bird Ticket price, so attendees know that now’s the best time to book.

GDPR may have struck the fear of god into many business owners (and marketers), but we’ve embraced it as an opportunity to help our customers do right by their attendees. It chimes well with our ethos—we’ve always respected people’s data.

One of the new features we’ve added this year is the option to set Data Protection information at account level, which pulls in to all your events and can be overridden at individual event level if needed. You can find this setting under Customize > Data Protection (note that you’ll need to be an admin on the account to be able to edit the settings).

You fill in your contact information, consent statement, T&Cs, privacy policy and data retention policy, and we spin up a nicely styled “small print” page for you, linked to from the bottom of your event homepage. Not sure what to write? You’re welcome to take inspiration from the one we wrote for Admission. 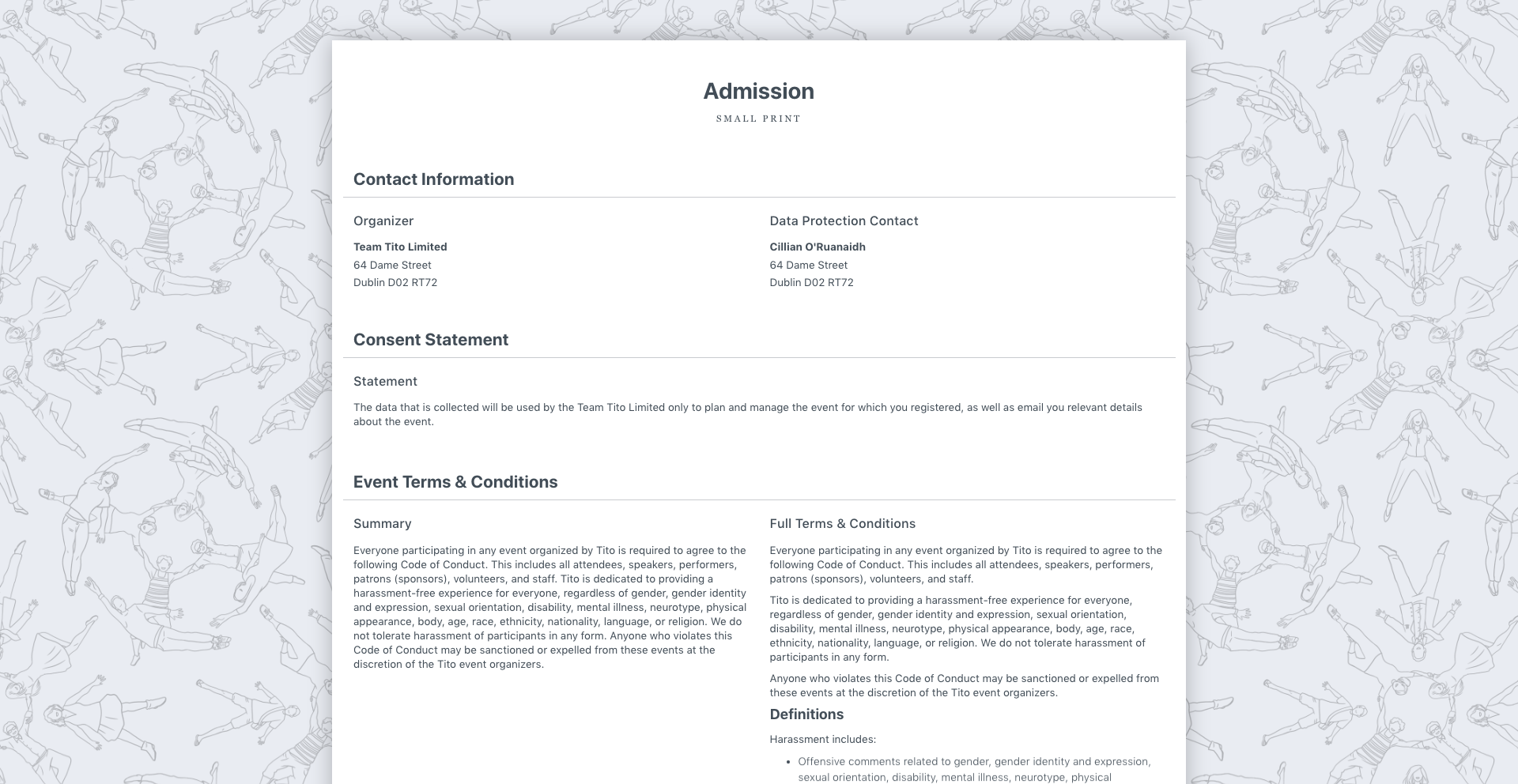 The Consent Statement is particularly key, as this short paragraph will appear during the checkout flow—requiring attendees to accept before they can complete their booking. Tito also adds a link to the rest of your terms automatically. 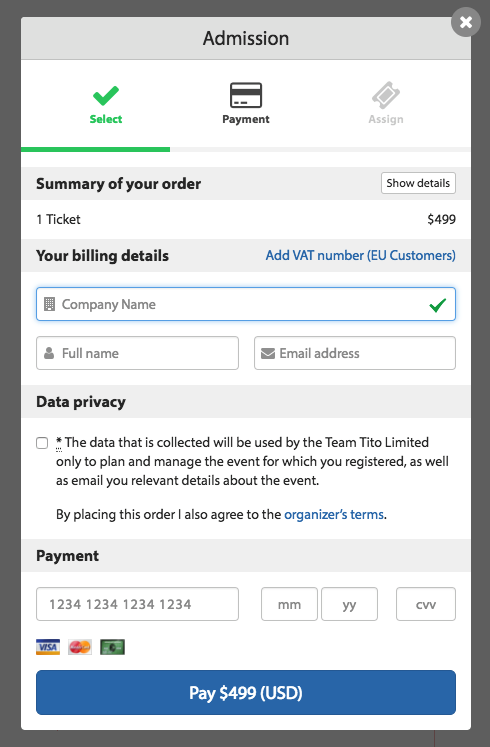 The Consent Statement is the starred paragraph under the Data privacy heading.

For Admission we decided to include our Code of Conduct in our T&Cs, because we think it’s important to be clear and specific about how we define inappropriate behaviour, and how we’ll respond if it’s reported to us at the conference.

For the last 18+ months we’ve been hard at work on a new version of Tito that we’re calling Dashboard. It has involved rebuilding Tito from the ground up to make it faster, more beautiful, and more intuitive, and we’re excited to launch it at Admission next month [September 2018]. 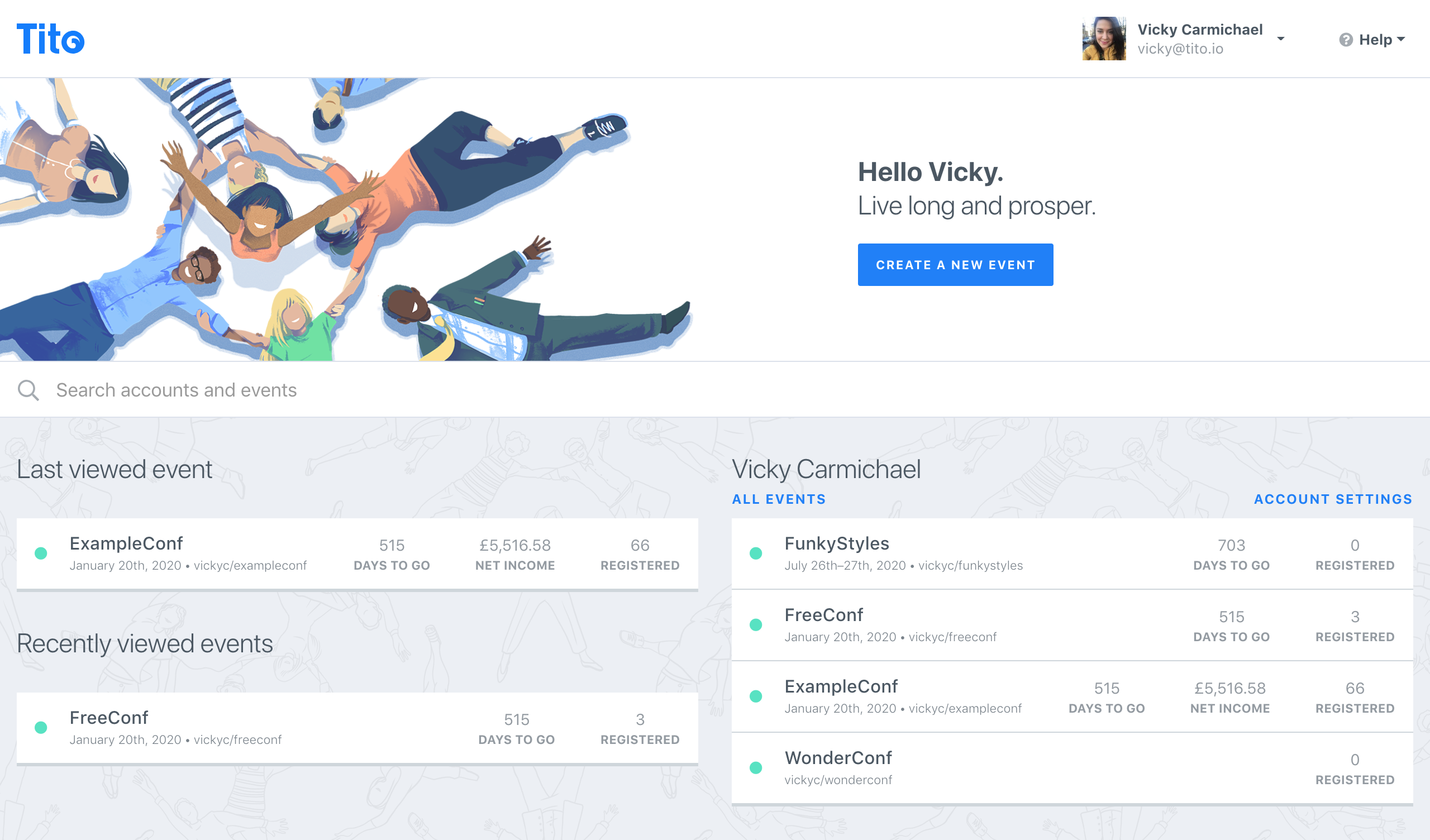 One of the new features we’re finding particularly useful is the Event Papertrail. It offers a clean timeline of all activity across your event, from registrations to team actions. As several of us are collaborating on using Tito to run Admission, it’s great to have a central transparent record of who’s done what, especially as a couple of us in the team work remotely.

Following the launch we’ll be starting to roll out some other new and highly-requested features. And for Admission, we’ve been testing some of these new features in production.

Our RSVPs feature, currently in private beta, allows you to create a unique “invitation” URL which can only be used once. Before opening registrations up to the general public, we wanted to let our customers know what we were doing and give them the chance to book before anyone else.

In fact, we were so excited about the conference that as a team we went through our database and bagsied the people we wanted to reach out to personally! We then sent individual emails containing an RSVP link unique to each person—it took a long time, but we’re not fans of an impersonal email blast. Luckily, we were able to speed things up a little by importing email addresses to Tito in batches, so at least the RSVP link generation part was effortless.

By using the RSVPs feature on our own event, we’ve learnt a lot about how to make it better. We’ll be iterating on it, and making it available to everyone in an upcoming release of Tito. If you’re interested in trying it out before then, get in touch.

Another feature we have in an even earlier stage of development is Surveys. At the moment we have a feature called Interested People which allows you to collect email addresses before launching ticket sales, and a Data Collection feature which lets you add custom questions to the checkout process.

With Surveys, our idea is that you can create forms which can be used at any stage of the event organisation process. Perhaps you want to collect CFP entries, or solicit post-event feedback. Our aim with Surveys is to let you design exactly what you need—part of our ongoing commitment to making Tito as flexible a platform as we can.

We used Surveys to create a custom interest gathering form on our event website before we opened up registration. We have big ambitions for Surveys, so it’s not available to test just yet, but watch this space…

And because we can’t help ourselves, we also did some fancy stuff. Like magical URLs! ?

You probably already know that in Tito, every ticket and discount code has its own URL that you can link to or share directly. It looks like the event homepage but it displays only the ticket in question, or with a discount code already applied.

This is helpful for running promotions or in scenarios where you don’t want to confuse attendees with lots of options, but as we’re using the widget embedded on our conference website, we needed to recreate this a little differently.

Here’s where it gets suuuuper technical (and why Paul is going to write a follow up post about the specifics), but we made use of Nuxt, an application framework built around Vue.js to dynamically pull in data from Tito depending on the URL displayed.

So this means that after a bit of initial setup, we can create promotional codes as needed in Tito, and just append /discount/special-code to the event website URL and it’ll show the widget with the discount already applied! Which truly feels like magic, even though we know exactly how we did it (well, Paul does).

Doc and Paul co-founded Tito because they knew event registration software could deliver a better experience for both organisers and attendees. I came on board as customer experience lead because I’d been a Tito customer for four years and knew what a great product it was.

Using Tito for Admission has been a reminder of how good it feels when things just work. But it’s also been an eye-opener for ways we could make things even better. Lots is going on behind the scenes to squash bugs and make improvements, and the addition of two awesome new members of the engineering team is making real momentum possible. It’s pretty exciting!

We can’t wait to show you what we’ve been working on. I’m not sure if I mentioned, but we’re going to be showcasing it all at Admission in Chicago on 24-25 September, if you’re interested? ?