As Annie outlined in an earlier post on this blog, Admission became a smaller event than we’d originally planned, which became a success.

For context, in case you’re not familiar with Admission as yet:

Much as my guilty pleasure is often reading “18 suuuper amazing tips for every suuuper savvy event organiser” posts, I wanted to lay out event marketing strategies that worked for us, and what didn’t, based on real experience rather than well-intentioned speculation.

I figure that a lot of our customers, and organisers beyond that, want to see where they can sensibly invest their money when it comes to promoting their event. So, without further ado, here’s the real story:

As any good marketer will tell you, vanity metrics are distractions you can’t afford. To measure the success of emails, we looked at engagement as our primary goal.

As a design-driven company, we wanted to maintain simplicity and usefulness throughout our email correspondence with people we were inviting to Admission. 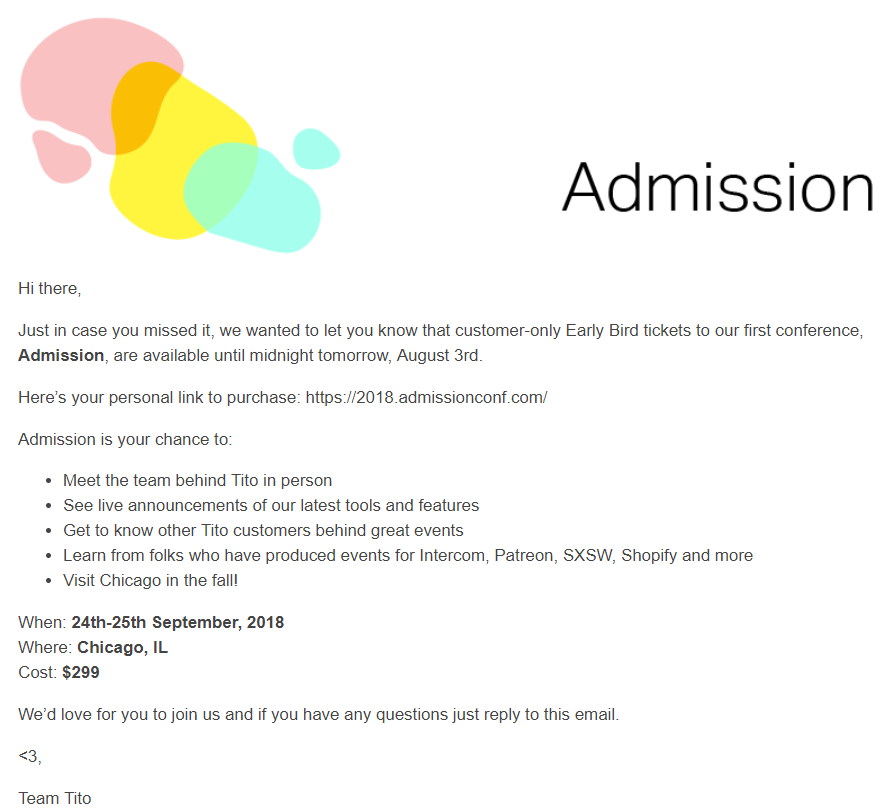 For our first email we went with an overview of the main goings-on that were due to take place in Chicago at Admission. We included a personal link to purchase (this was customised via a combination of the Tito software and our marketing automation system) which, when clicked, brought that person to a landing page that addressed them by name where they could buy a heavily discounted ticket. (Neat, huh?) 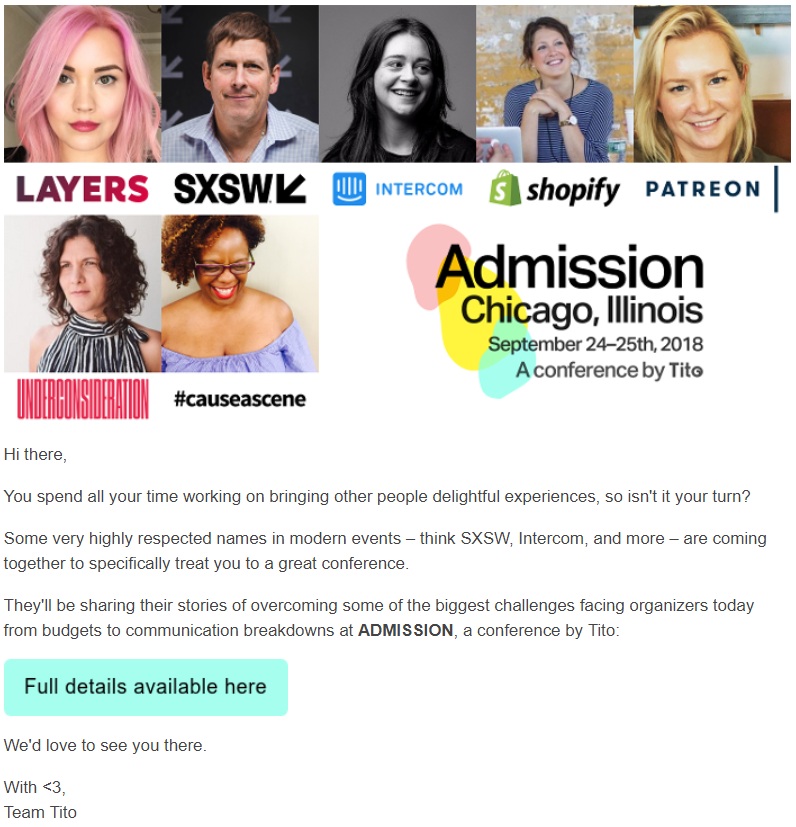 In the second run, we were cognisant of the fact that we could have done better with our click-through rate, so we added a more eye-catching call-to-action that used one of the brand colours we had selected for Admission. 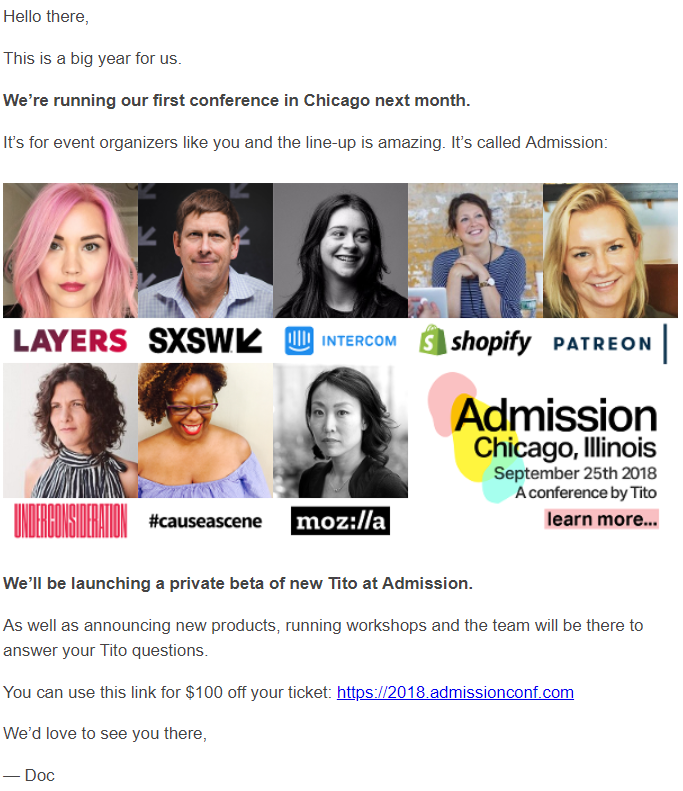 For our final variation, we wanted to draw attention to the private beta version of the Tito software that we were releasing in tandem with the event, given that this email was being sent to users only. We also experimented with a different placement of the banner/CTA. Lastly, our co-founder, Doc penned and sent these to add some additional personalisation.

Just as a note, we also personalised the name field in each of these emails. We didn’t just call everyone “there”.

In review, we looked at these figures when compared to the standards for our industry (software and web app providers) as outlined by Mailchimp and were very pleased to report that we were well ahead of the curve: 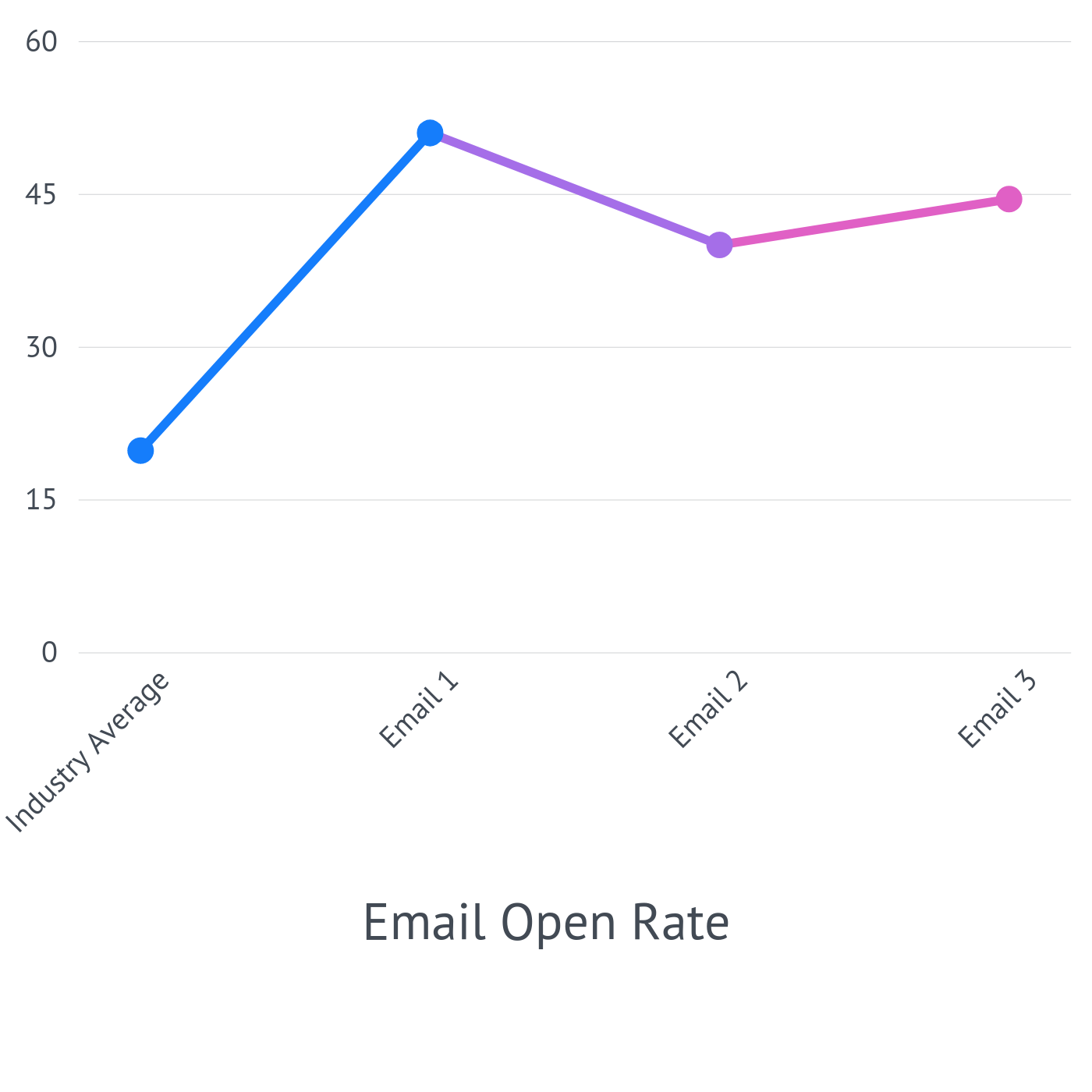 Once we did a little bit of experimenting, of course. 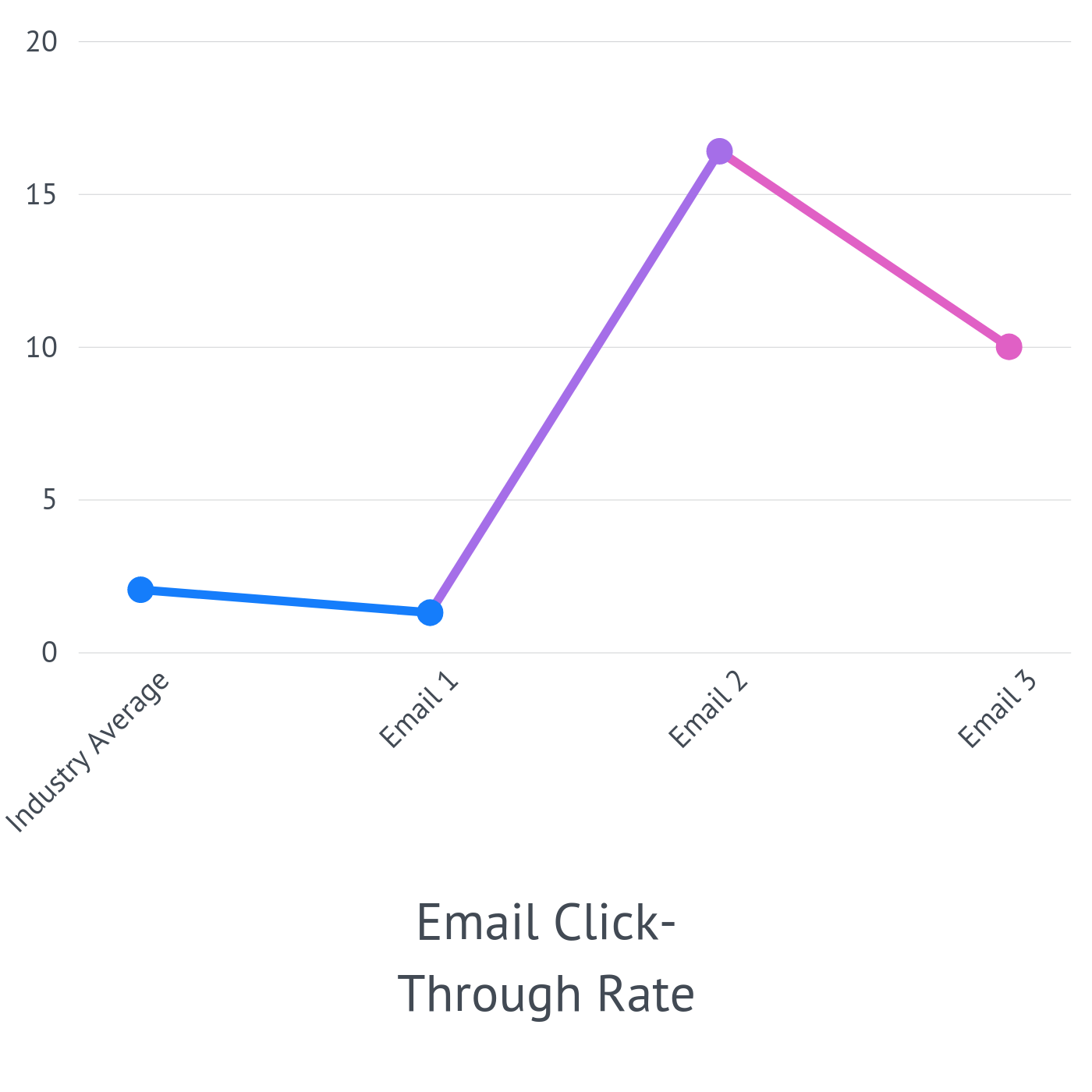 Additional personalisation – We could have tested using a variety of different personalisation tokens, for example the contact’s job title or company name. These tactics, or variations on them, have historically been shown to improve conversion rates by 14% or more.

More advanced drip campaigns – Honestly, we could have tried this, but it rubs me up the wrong way. We could have used abandoned cart processes (compelling, as industry statistics tell us that 40% are opened, 50% of those click, and 50% of those buy. Meaning 1 in 10 people who get an abandoned cart email buy, for those of you who don’t like quick math). But, given that the whole point of our software is to make transactions as painless and unannoying as possible, I can scarcely think of anything less on-brand that using that tactic.

Ever the fans of experimentation, we wanted to try a couple of variations when it came to call-to-actions for Admission. These CTAs were used in our email campaign (above) and hosted on blog posts that we used as part of our campaign, as well as blog posts that regularly get the highest organic search traffic on our blog.

You might remember this call-to-action (CTA) from such emails as “the one directly above”, but in case you’ve jumped here, we created this variation in a bid to improve the click-through rate (CTR) that we were achieving in our email campaigns:

This CTA obeys basic rules of thumb based on how we used it:

Variation 2 was, to be blunt, a lot fancier:

We decided to use the speaker line-up and lean on their brands’ popularity among our target audience.

We also used this CTA at the end of our blog posts about Admission leading to it having a 33x higher number of views than the CTA we used for email alone.

For Variation 1 we achieved a click through rate of 10.71%, which isn’t bad at all, considering the average CTR is 3.29%, though this figure covers all industries.

For Variation 2 we saw a CTR of 2.36% but, given the higher numbers of traffic, we expected the conversions to go down. That said, there was a large discrepancy between how successful the CTA was on different blog posts. Though the URLs won’t be as easily decipherable for those of you who haven’t spent the last few months writing about and measuring them, I’ve collated some of the results below: 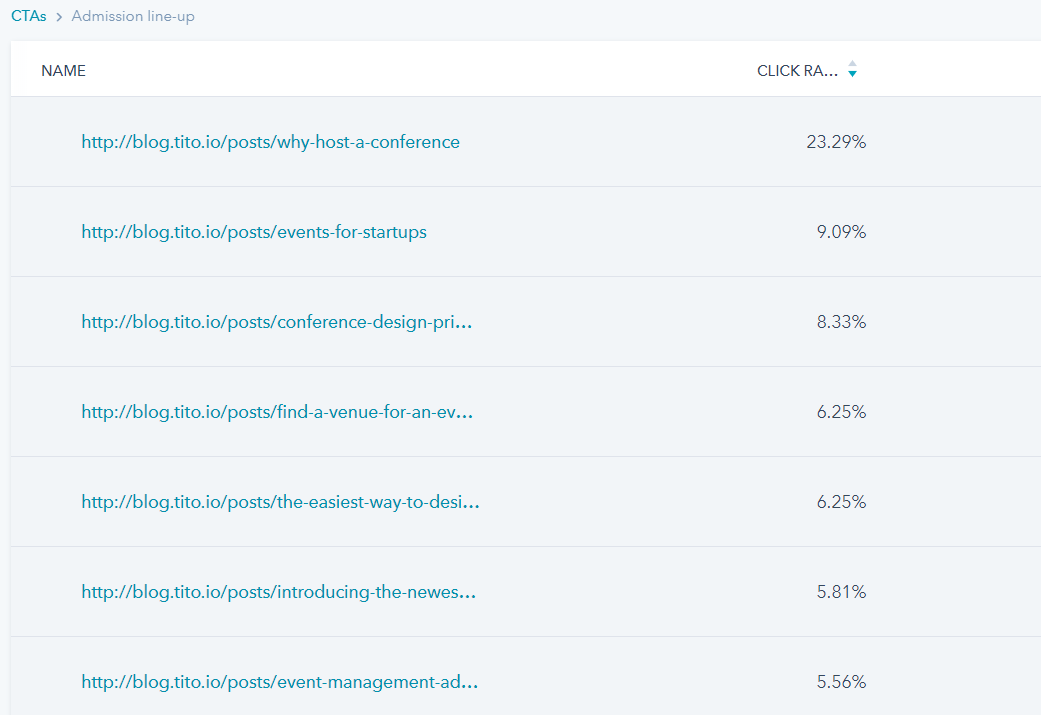 Of these, the three most successful were:

From this, there’s a few deductions we can make. Firstly, the most successful was the post whose content was most closely connected to the conference specifics. It teased at what was going to take place and what we were committed to achieving for attendees, so it’s natural that the people who read it would be interested to learn more.

Secondly, our event round ups are always popular posts, and are usually found online by people looking for new events to attend, so it’s also natural that they’d be happy to get some more info about Admission.

Lastly, we pride ourselves on our design. At the conference, we got particularly good feedback on our badges which featured the “blob” motif replicated throughout our branding and which were printed on clear plastic (see picture below). There’s a whole other account to be written about how good design affects conversion rates, but it seems to be a positive correlation at the very least. 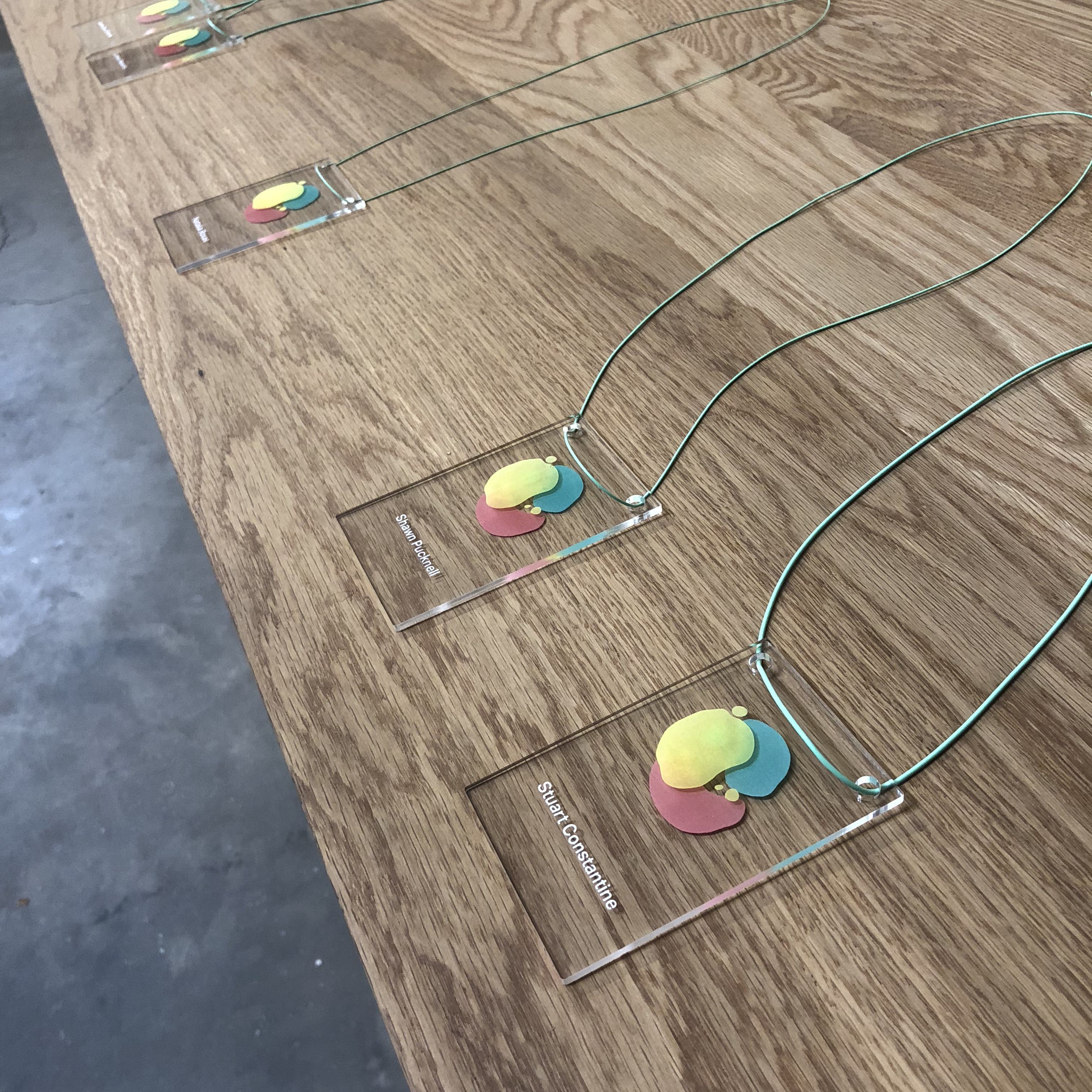 Smart CTAs – We could have used dynamic or “smart” CTAs to make the visual, copy, or both parts of the button change once a Tito customer had clicked and not engaged further. That would have doubled our chances of drawing their attention with different aspects of the event. At the time, we were pretty happy with the CTR and thought the design was pretty attractive, but this could have been an interesting tactic if we’d wanted to test some more things.

I’m including this reluctantly. In my revent experience, Twitter ads are predictable, but only in so far as their “industry averages” are usually as high as you can go with conversions, and no higher.

Here are the variations we went with in the hopes of generating more awareness about Admission:

81% of event organizers are most concerned with finding innovative ideas. We’ve set up #admissionconf to help solve that.

37% of event organizers plan 16+ events a year, so we’ve created a conference that’s 100% focused on helping them achieve their goals:

We’ve noticed that 63% of #eventprofs use social media to drive attendance before their event, so we thought we ought to share some details about our own conference: Admission.

There were some mixed results

So, in short, we were smack in the middle of the average link click and considerably below average when it comes to cost per result. However, this exercise (as you’d expect) only contributed to awareness about Admission, rather than being a direct sales vehicle.

Video is a format we’re excited to delve into in 2019 (and *spoilers* maybe even a little bit sooner). What’s exciting when it comes to its applications for something like Admission or future events we might host is its seriously impressive engagment rate. Some campaigns reach a peak of 27% engagement at approximately €0.03 per view.

Albeit, we could have also experimented with a different platform given that Twitter has never made a profit. However, our Twitter audience is the largest of our social networks by a significant amount.

Recipients would get two things: an invitation, and personal note from our commercial lead, Karl, with a one-pager on what Tito is all about. 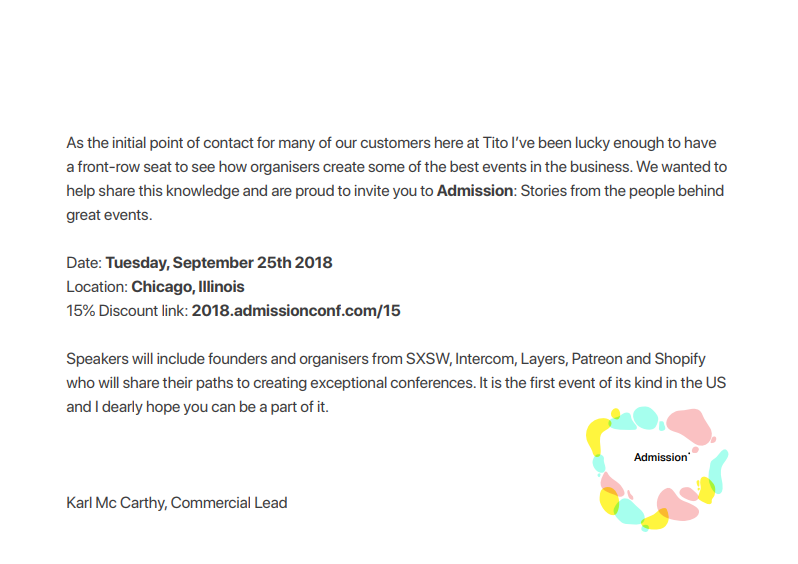 In order to further incentivise the people we were inviting to attend, we added a 15% discount code to each of these invitations. And, yes, Karl signed each one and addressed each person we invited by name. Details of his likelihood to develop carpel-tunnel syndrome were omitted from these results.

On the underside of the card, our junior designer, Dearbhla, with help from our co-founders, Doc and Paul, created an image of the Great Lakes out of the brand colours we’d been using for Admission. They were then augmented to fit in with the aesthetic of the “blobs” we’d be using for branding. This was the end result: 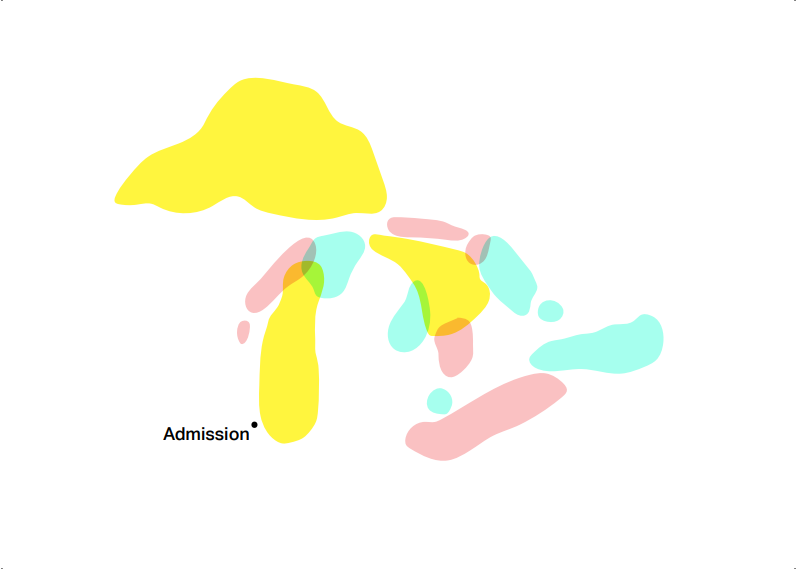 As mentioned, we also included a one-pager about Tito. We weren’t just inviting customers, so we wanted to remove the anonymity that might have come from leaving the invitation as it was without this. Here’s what we wrote: 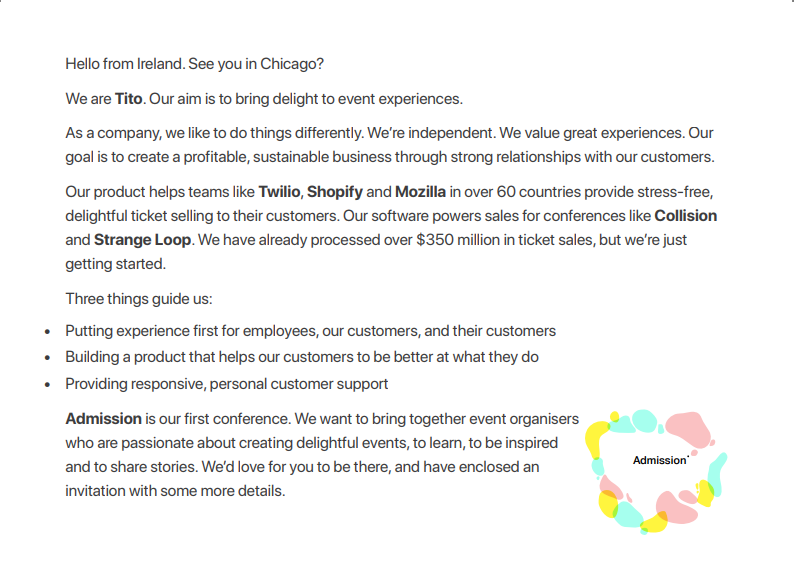 To complement the illustration on the back of the first part of the invitation, our design team got to work recreating the shape of Ireland (the country where Tito has its headquarters) in a similar style to the illustration of the great lakes. This was the end product: 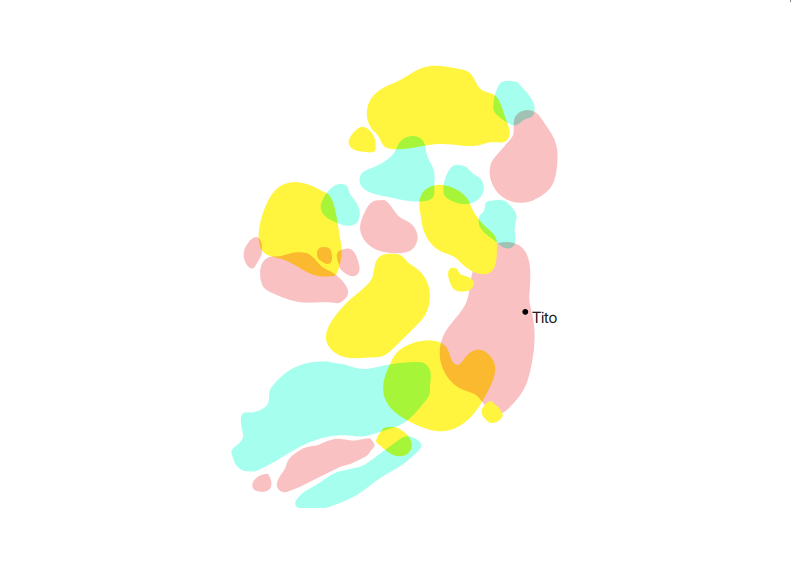 After that, it was a simple matter of mail merging the invitees’ locations and printing labels. Here’s what we learned from this endeavour:

The novelty of this approach was something we’d hoped would resonate with invitees, but this result outdid at least my expectations and will be something we replicate the spirit of in the future.

Recruited more of our team to sign, stamp, and seal the envelopes.

So, what’s the final word?

The most accurate thing anyone’s ever told me about being a marketer is this:

“We spend our day-to-day Jekyll and Hyde-ing between being empathetic psychologists and average mathematicians.”

The most important part of any campaign, second to fulfilling the purpose of getting people ready to buy stuff (and sometimes even more than important than that), is that it’s an experiment you can use to improve upon again and again.

Given that these efforts were undertaken for our first conference and our first marketing campaign in the US, I think we did pretty well, but with the promise that we’ll do even better next time.