There are two types of people on St. Patrick’s Day in Ireland:

Those who embrace it.

And those who fear it.

As an Irish company, I thought we ought to personally embrace the day by answering some frequently asked questions about Ireland. The first one that came up, unsurprisingly, was “How Ireland celebrates St. Patrick’s Day”, which we’ve covered (succinctly) above.

For more, we checked on Answer the Public to see what some of the most Googled questions and terms about Ireland were to share some light on the topics:

1) “Are Ireland and England the same country?”
Ahem, no.
Ireland gained independence from the United Kingdom in the early 20th century and is a sovereign state.

2) “Are Ireland and the UK allies?”
Paul and Doc are friends, yes.

3) “Can Ireland host the Olympics?”
Yes! We were the first country outside of the United States to host the Special Olympics, in fact.

6) “[Did Northern Ireland or the Republic of] Ireland vote for gay marriage?”
The Republic did exactly that in 2015. (Except for Roscommon.)

7) “Why Ireland speaks English”
A complicated, but interesting one. Some researchers place blame on the Irish national school system of the early 19th century where pupils were not allowed to speak Irish.

In addition to that a very dark part of Irish history, namely the Great Famine, led to the death of around one million, primarily Irish-speaking natives. As well as this, many formerly rural citizens were forced to move to cities where speaking English was an essential in everyday life.

On a brighter note, we still have Irish-speaking areas called Gaeltachts where students and locals speak Irish as their primary language.

(Ironically, this is where the grammar in the Google searches started to lose the run of itself)

8) “What Ireland money is called”
Ireland uses the euro which it adopted in 2002 and before which the Irish punt was in circulation.

8) “Ireland where Star Wars was filmed”
You’ve come to the right place. Episodes VII and VIII (specifically the scenes featuring Rey, Luke and of course the porgs) were filmed on Ceann Sibéal (pronounced “kuh-yeow-n sib-ale”). They’re replicas of the original huts from Skellig Michael, also in the South-West, also featured in the films.

Over the next two months, there are only seven tours still available, but you can check them out here for future reference.

9) “What Ireland eats RTE?”
I really haven’t a clue what these people were trying to get at, but RTÉ is the Irish national broadcaster famous for such programmes as a hand puppet that brought multiple generations of Irish children to the zoo every week, an irate turkey that entered the Eurovision, and the six o’clock news.

As for eating a national broadcaster, full nutritional information is unavailable at this time.

But really, the Irish nation is struggling with its weight.

We’ll see a sugary drinks tax come into play next month, but as for other factors and effects, we’ll have to wait and see. 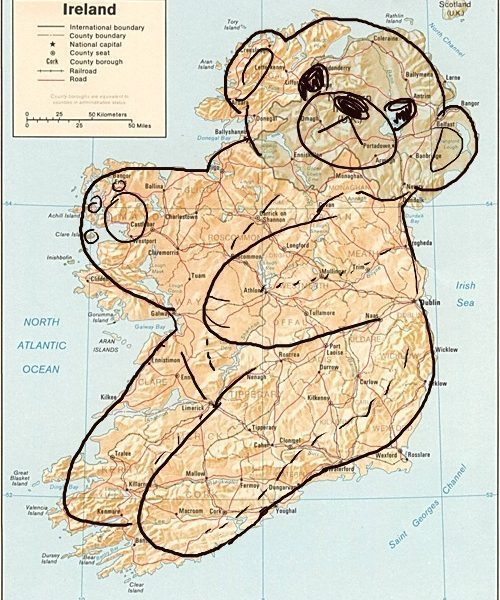 13) “Why Ireland has no trees?”
This is a bit of a misconception, all told. Ireland has loads of trees. In the office alone we have several (small) trees.

The thing is, Ireland has no real forests.

On reason for this is that Elizabeth I expressly ordered the destruction of all woods in Ireland to deprive the Irish insurgents of shelter in 1560, contributing to our decline in forest coverage from 80% to 1%.

tl;dr: we have trees.

14) “Ireland is greater than wife?”
Because wife is not country?

15) “Why Ireland is the best”
We couldn’t go that far or we’d sound up ourselves. But it is a pretty great place to work. And thank you!

In all seriousness though, if you are out and about this Patty’s Paddy’s day, keep these tips in mind:

And, if you’re so inclined, you can check out some of our Irish Tito Customers while Éire is on your mind:

But most of all, happy St. Patrick’s day in Ireland, or abroad from all at Tito, whether you spend it learning a little bit about the history of Ireland, wearing a fake, green top hat, or drinking a few quiet (or not so quite) pints.